IEEFA: Renewables should be focus of Vietnam’s Draft PDP8, not coal and gas 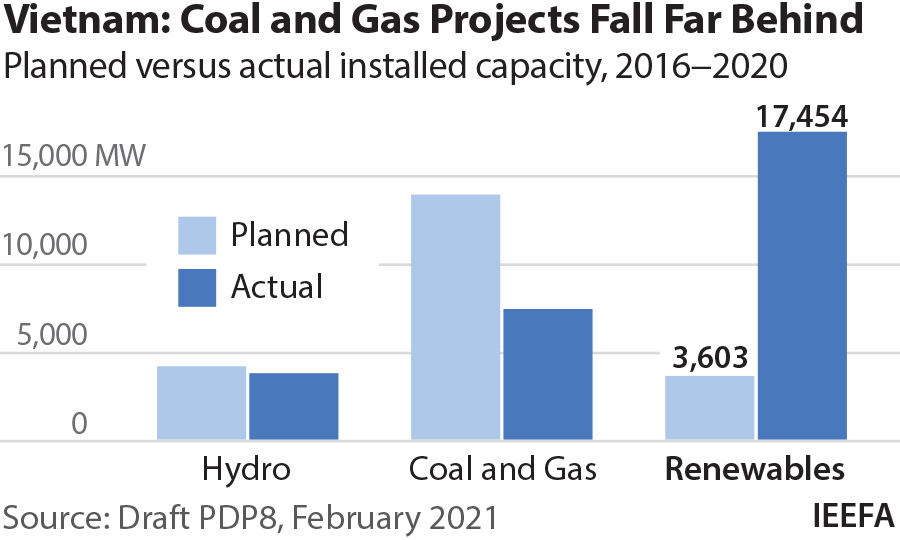 11 March (IEEFA Vietnam): Vietnam’s recently published draft power development plan for 2021-2030 (PDP8) has failed to acknowledge the importance of developing a more flexible system that can accommodate a changing technology mix, according to a new report from the Institute for Energy Economics and Financial Analysis (IEEFA).

“Many conventional coal and gas-power projects failed to progress during the development process, only managing to meet half of the targeted capacity for 2016-2020.

“Solar power developers however over-delivered by five times, and they have done so in a fraction of the time.

“This evidence would surely inform the next stage of Vietnam’s power development. “Unfortunately, planners have instead opted for generation-centric decisions in shaping the recently published draft PDP8.

“Instead of acknowledging the importance of developing a more flexible system, baseload coal and gas-fired power will continue to dominate 57% of the pipeline to 2030 in the draft PDP8.

“This strategy conflicts with the most important trends shaping global power markets as well as with the planners’ objectives to ensure energy security and minimize overall system cost including power costs, and health and environmental externalities.”

PDP8’s usefulness as a roadmap will be limited

As the government reviews plans for PDP8, IEEFA’s new report outlines four issues that deserve attention if Vietnam hopes to diversify its generation mix, meet new demand for sustainable power, and control power tariffs, with renewables arguably playing a bigger role in PDP8, and not less.

PDP8’s usefulness as a roadmap will be limited due to the rapid pace of energy transition globally. Coal advocates who dismiss the ability of renewable energy and battery storage as a cost-competitive replacement for baseload coal power pipeline in the future are incorrectly assuming that the technology and how it is deployed will remain static.

“In order to manage forecasting errors and maximize the potential of new technologies, Vietnamese planners should opt to focus more on the architecture of the energy system—placing more focus on the strategic importance of both flexibility and grid development—in particular,” says Brown.

2. Baseload fossil fuel options come with risks that must be acknowledged and mitigated

Vietnam’s high reliance on coal power projects, that are subject to frequent delays, has put Vietnam on the brink of serious power shortages on more than one occasion. Coal-fired power has been the biggest loser in energy transition to date. These projects, although optically “cheap”, have failed to deliver in the way that planners in many energy growth markets had expected.

3. Failure to account for real costs of fossil fuel power will hurt rate-payers in the long-run

One of the most important take-aways from the rapid shift in global power markets is that power sector planners are increasingly vulnerable to fatal design errors if they fail to account for the real costs associated with different technology and fuel choices. Coal-fired power is a mature technology and there is little prospect of meaningful cost improvements. LNG-fired power advocates, on the other hand, have tended to underestimate price volatility risks, the cost of associated infrastructure and to gloss over new geo-political risks due to vulnerable supply chain.

4. Underestimating the need for green power will threaten GDP growth

Over the past two years, Vietnam’s economic growth potential has diverged sharply from what IEEFA has observed elsewhere in Southeast Asia. As Indonesia has struggled to move away from fossil fuels, key supply chain companies have increased their commitments to decarbonize their supply chains. Vietnam is the one country in the region that has worked hard to meet the needs of these key providers of foreign direct investment.

“Vietnam must take bolder steps to win the confidence of high value foreign investors that are working hard to meet the needs of their global customers,” says Brown.

“This is a period when Vietnam should want to send a message to global investors that Vietnam can meet their green energy needs and that new clean energy options will benefit in a market progressing toward competitive auction structures that can deliver cost competitive outcomes.

Read the report: Vietnam’s PDP8 should be a catalyst for innovation, not a barrier to change