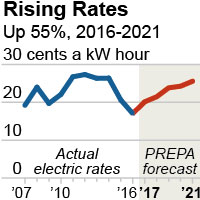 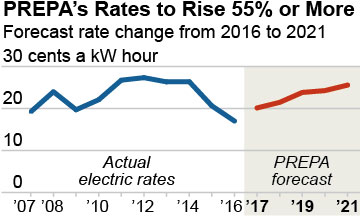 [This is the first of five commentaries: Next week, detail on likely increases in electricity rates; fees to consultants and advisors; how the deal falls short of its core goals; short shrift to renewables.]

While the resulting deal is aimed ostensibly at preparing PREPA for a healthier financial future, it fails abysmally to do so. We explain in a report we published today why it will most likely have the opposite effect and how the process of restructuring is being mismanaged.

By way of background, PREPA’s problems have come about as the unnecessary result of poor fiscal practices, unwise acceptance of increasingly risky bond deals, ill-advised political interference in decision-making, an outdated agency framework, and an onerous rate design.

Electricity rates are already too high in Puerto Rico, an island that has one-third the median income of the handful of U.S. states that have similarly high electric rates. Rates in most states are about half what they are in Puerto Rico.

For PREPA to achieve true financial stability, bondholders must accept a more significant reduction in principal, and the agency must adopt sound, auditable financial practices.

How Puerto Rico’s Electric Company Can Seize the Day