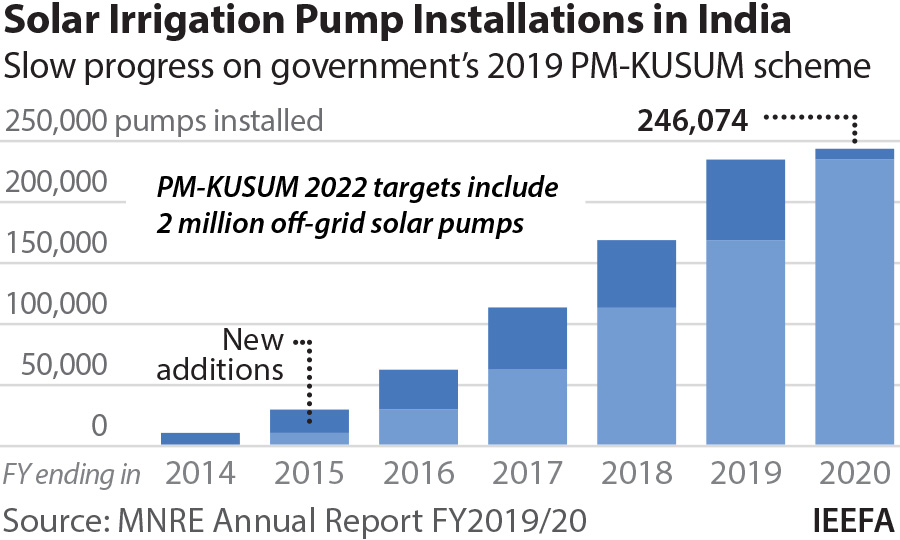 11 June 2021 (IEEFA India): India’s mission to deploy some 2 million off-grid solar-powered irrigation pumps is making sluggish progress, with only one-eighth of the target achieved so far, according to a new report from the Institute for Energy Economics and Financial Analysis (IEEFA) which urges the central and state governments to remove bottlenecks in the installation of solar pumps.

“Solar-powered irrigation is a huge opportunity for India,” says author Kashish Shah, IEEFA Research Analyst. “But despite the clear multiple commercial benefits, the rollout of solar pumps has been much slower than anticipated.”

Solar-powered irrigation is a huge opportunity for India

The report calls for a renewed push on installation of solar-powered pumps under the Ministry of New and Renewable Energy’s Rs34,422 crore (US$4.7 billion) PM-KUSUM scheme, which has a 2022 target of 30.8 gigawatts (GW) of solar capacity, including about 2 million off-grid pumps.

The scheme should have accelerated solar pump deployment, but at the end of financial year 2019/20 a total of around 246,000 solar pumps were deployed and only 8,900 of these were installed in the 12 months after the scheme was launched in 2019.

By comparison the number of fossil-fuel-powered water pumps in India totals more than 8.8 million.

“Replacing fleets of diesel generators in the agricultural sector would reduce emissions and air pollution and contribute to the government’s efforts to promote a self-reliant India by reducing reliance on costly, subsidised diesel imports,” says Shah.

“As well as providing clean power to farmers, solar pumps would also reduce the burden on distribution companies (discoms) of providing highly subsidised power to the agricultural sector.

“This could potentially even lead to reductions in tariffs for commercial and industrial consumers who cross-subsidise electricity for agriculture.”

The report notes key bottlenecks keeping the scheme from making headway. These include a lack of coordination among the agriculture, water and power state government bodies involved in implementation, difficulties for farmers, especially small farmers, in investing in and accessing bank finance for solar pumps, the different asset ownership models (farmers, discoms, private developers), and technological challenges.

“When it comes to the implementation of the scheme by the states, it’s a case of one size does not fit all,” says Shah.

“Different models of pump ownership could work for different states or even different districts, depending on the dynamics of the agricultural and power sectors in that area.

“Each state needs to zero in on which mode of solarising its agricultural power demand – off-grid or on-grid – works best for them.”

The report looks at progress of solar pump deployment in three states; Gujarat, Maharashtra and Andhra Pradesh, and notes the ambitious approach taken by Andhra Pradesh to solarise the state’s entire agricultural demand through distributed solar, as well as using the enormous cost advantages of centralised utility-scale solar as an alternative. Both schemes work.

Shah says deployment of solar pumps across India is key to expanding distributed solar generation capacity, which will in turn accelerate the transition to renewable energy.

“An advantage over utility-scale solar generation is that distributed solar reduces the need to expand transmission capacity and doesn’t require large areas of land.

The report also highlights an opportunity for manufacturing of solar pumps under the Make in India campaign, with the potential to cater to domestic and international demand from markets such as Bangladesh and Africa. There is also an opportunity to build on work done by the International Solar Alliance (ISA) providing sustainable irrigation solutions to farmers in member countries, with the key potential of Prime Minister Modi’s proposed World Solar Bank aiming to leverage this.

Developing, scaling and financing solar irrigation could be an area of focus for the India-U.S. climate and clean energy partnership and also for the G7’s ‘Clean Green Initiative’ which aims to channel funds into low carbon infrastructure at scale into developing economies.

The author is available for interviews and background briefings.