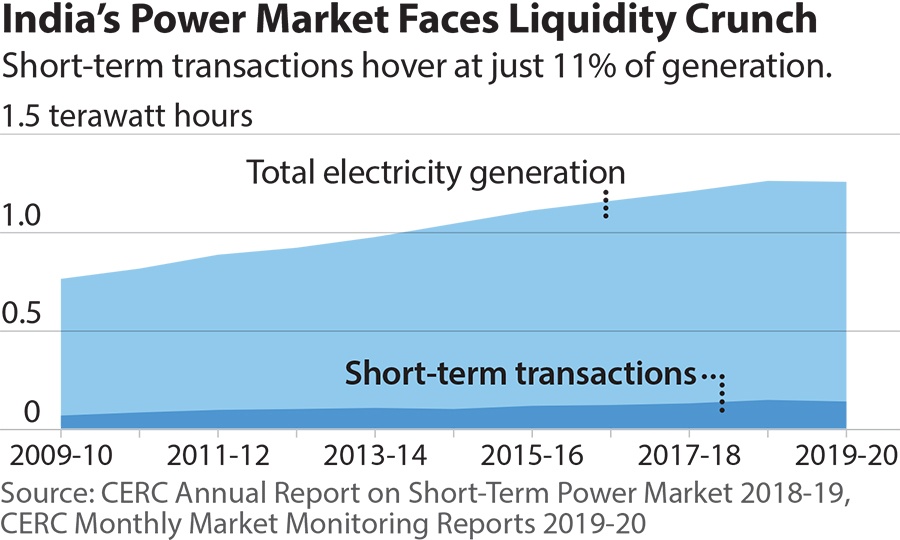 24 September 2020 (IEEFA India): A transition towards more national trading of electricity in real-time could help India’s power sector achieve competitive price discovery, reduce costs for consumers and accelerate the shift to a renewables-based system, according to a new briefing note by IEEFA. 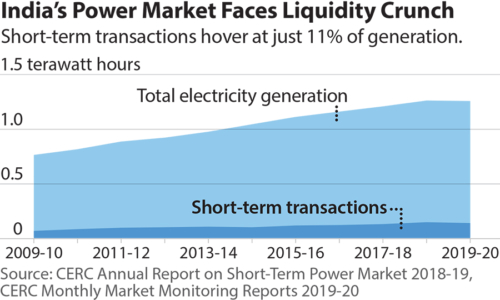 “A national pool would drive down the average cost of supply, forcing closure of end-of-life, inefficient and polluting thermal power plants while addressing the issue of overcapacity in the thermal power sector.”

TRANSACTIONS BY PARTICIPANTS IN THE SHORT-TERM MARKET MADE UP JUST 11% OF INDIA’S OVERALL ELECTRICITY GENERATION IN THE FISCAL YEAR 2019/20 – a share that has remained virtually unchanged over the past decade. To-date, renewable energy trading in the short-term market has been minimal, at less than 1%.

Garg notes however that recent developments in the short-term market – for example the rollout of the real-time market in June and the Green Term-Ahead Market in August – will facilitate the trading of renewable energy.

A national pool would drive down the average cost of supply

“These new financial products are an important step in the right direction and will help harness the potential of the short-term market,” says Garg.

“They can help developers and distribution companies to price and hedge risk without having to sign long-term PPAs to secure financial closure of projects.

“Meanwhile there is cheap, clean energy available in the market in the form of renewables.”

Discoms are struggling with huge financial losses – Rs4,88,686 crore (US$67bn) and a total outstanding debt of Rs4,78,000 crore (US$66bn) in FY2018/19. They pay capacity charges for contracted volume, even at cheaper off-peak times and regardless of whether power is despatched and consumed or not.

“By improved transparency in a national market, trading in the short-term can allow discoms to better balance supply with demand at all time intervals. It allows them to sell the surplus power they have already paid for in their contracts,” says Garg.

“They can also buy electricity at competitive prices and with greater transparency. It also helps developers to diversify risk and earn more revenues during higher value, peak-demand hours.”

Garg notes that deepening the short-term market further so that power is despatched on short-run marginal cost of production can improve the utilisation of generation assets and better integrate zero marginal cost renewable energy into the system.

“A SHIFT TO REAL-TIME ELECTRICITY PRICING FOR LARGE CONSUMERS WHOSE MONTHLY CONSUMPTION IS GREATER THAN 1 MEGAWATT PER HOUR WOULD BENEFIT THE MARKET,” says Garg.

“It would also assist in the development of grid-connected behind-the-meter solar and storage in the commercial and industrial sector. The right price signals would encourage large consumers to shift consumption from peak to off-peak periods and to use low-cost renewable energy when available.”

Currently, liquidity and efficient price discovery in the short-term market are constrained because transmission capacity is allocated to bilateral contracts with only the remainder made available for trading at the power exchange.

“Allocation of financial transmission rights between market participants could be instrumental in addressing the issue of back-down of power due to the non-availability of a transmission corridor,” says Garg.

“The Central Electricity Regulatory Commission has played a crucial role in supporting the short-term market with policy guidelines and regulations that have led to the introduction of new financial products and availability of open access for trading of power.

“We hope these positive developments will be followed by further regulations designed to increase trade in the short-term market for the benefit of energy providers and consumers.”