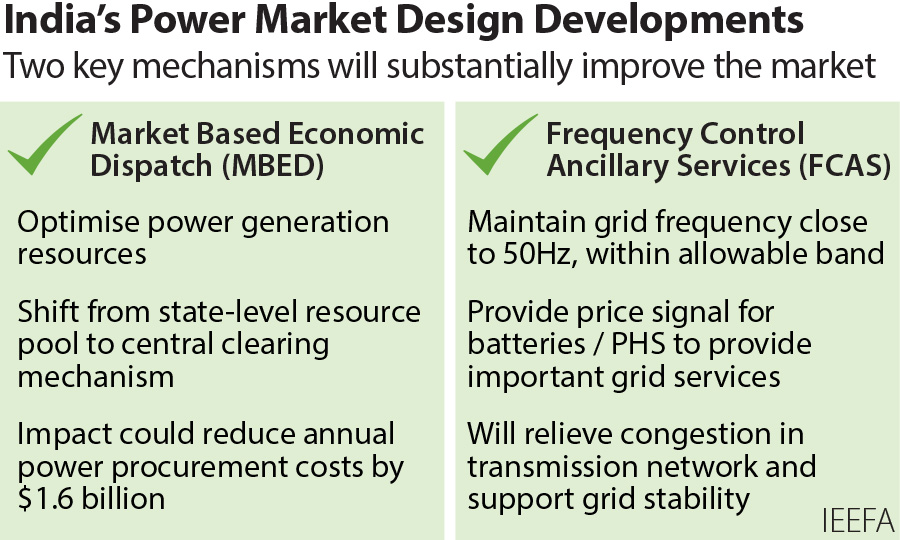 Both developments will improve efficiency, competition and liquidity in the power market.

A new Institute for Energy Economics and Financial Analysis (IEEFA) briefing note looks at the benefits and potential roadblocks to implementation of these key reforms and argues that they are important steps towards transforming India’s power sector into a low-emissions, low-cost and profitable part of the economy.

“Both developments will improve efficiency, competition and liquidity in the power market,” says the note’s author Kashish Shah, Research Analyst at IEEFA. Under the Ministry of Power’s proposed MBED mechanism, power would be dispatched through a central pool instead of at state level, helping to optimise India’s power generation resources.

Efficient price discovery would reduce power procurement costs by Rs12,000 crore (US$1.6bn) annually, according to government estimates, leading to an improvement in the financial situation of the state-owned distribution companies (discoms).

“Improved bankability of PPAs can potentially lower the cost of capital which will in turn reduce the cost of renewable energy and make the market even more conducive to renewables.”

Cheaper plants would be dispatched first which would raise the stranded asset risk for expensive coal plants.

Shah also points out that as the market becomes more competitive, cheaper plants would be dispatched first which would raise the stranded asset risk for expensive thermal power plants.

“The integration of high shares of solar and wind will require an increase in India’s reserve resources, particularly primary and secondary reserves, to manage deviations in the frequency due to the intermittency of renewable energy,” says Shah.

“The development of a formal market for FCAS will provide another substantial revenue stream for utility-scale batteries and allow them to operate as an important grid management asset.”

The note says the proposed reforms need finessing and calls for the FCAS regulations to be tightened to include battery storage among Primary Response Ancillary Services.

“These reforms will lay solid foundations for a modern and competitive market necessary to transform India’s power market,” says Shah.