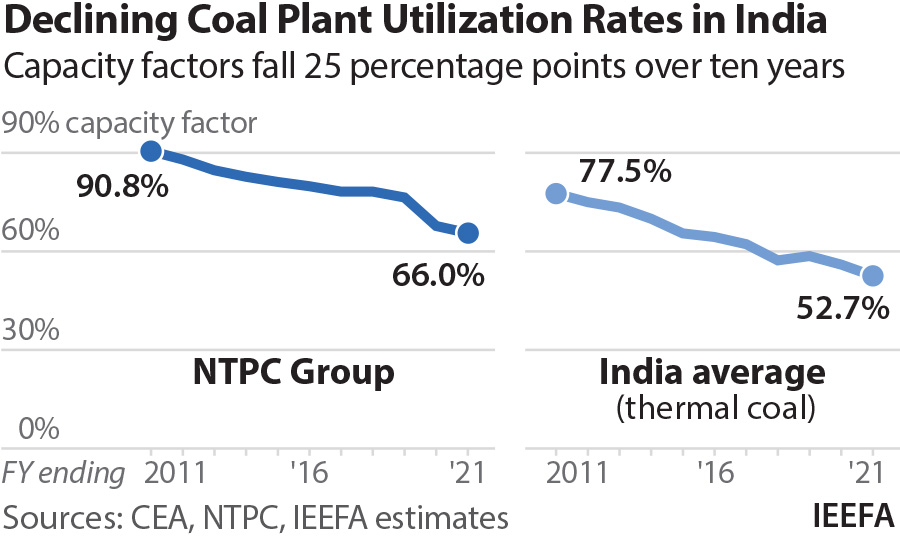 7 July 2021 (IEEFA India): India’s future coal-fired power project pipeline carries a massive stranded asset risk due to the collapse in the average utilisation rate of its coal-fired power fleet leading to an underestimation of financial risk for new projects, finds a new report from the Institute for Energy Economics and Financial Analysis (IEEFA).

There are currently 33 gigawatts (GW) of coal-fired power plants under construction and another 29GW of proposed projects under various stages of regulatory approval in India.

Author of the report, energy finance analyst Kashish Shah says the LCOE (levelised cost of energy) is the required tariff at which the net present value of the investment is zero.

“In other words, LCOE is the minimum required average tariff for a power asset to reach a breakeven return at the end of its life. Anything less than that suggests the asset is unviable.”

Shah found that the average utilisation rate of India’s coal-fired fleet has collapsed to a financially unsustainable low of 53% in financial year (FY) 2020/21 from a high of 78% a decade ago in FY2011/12.

For most coal plants in India, the LCOE is calculated with an assumption of utilisation factor of 85-90% throughout the life of the project. However, the LCOE turns out to be 64% higher with India’s average capacity utilisation factor sitting at ~55% for the last few years. “The aspiration for further builds of coal capacity stems from the notion that coal is still ‘cheap’,” says Shah. “However, with tariffs now below Rs2/kilowatt hour (kWh) (US$27/MWh), solar power is cheaper than even the variable cost of coal-fired power and is ready to absorb incremental daytime demand.”

IEEFA’s report highlights that utilisation factors of coal-fired power plants have declined not just in India, but across major electricity markets including China, the United Kingdom (UK) and the United States (U.S.).

“With zero fuel costs, the marginal cost of generation for renewables is practically zero,” says Shah. “On the other hand, with increasing inflation in Indian domestic coal prices and railway transportation costs for coal, the gap between cost competitiveness of renewables versus coal is widening.

“This raises a serious concern about the viability of coal-fired power plants.

“Debt servicing for underutilised coal-fired power assets becomes extremely difficult and creates a liquidity crunch in the whole value chain. The financial stress then spills over to the power distribution sector as well as affecting India’s financial lending institutions. This further inhibits growth in other important segments of the power industry such as renewables and transmission infrastructure, which are extremely critical for India’s electricity sector transition.”

The report concludes that the financial viability of India’s proposed and under construction coal-fired power projects should be re-evaluated based on the right estimation of utilisation factors including LCOE and capacity factor to avoid further bloating of India’s non-performing assets.