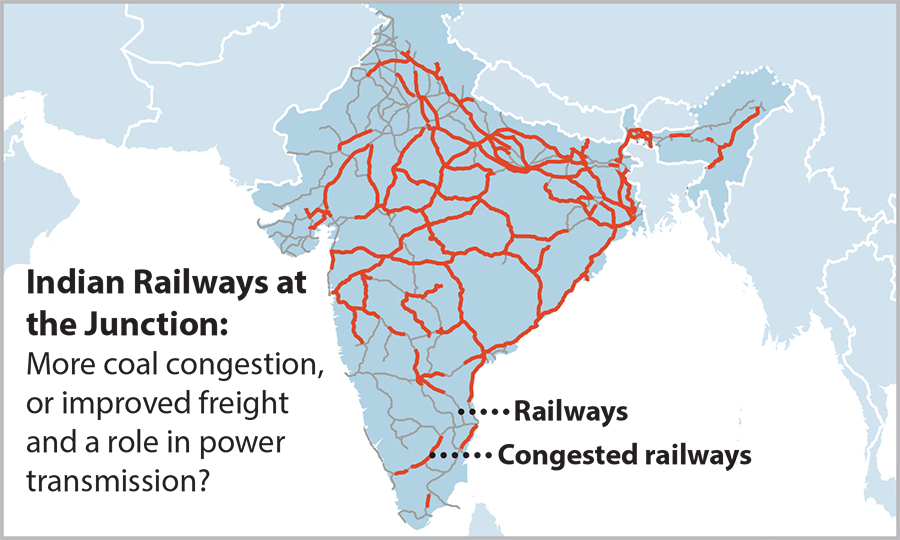 3 December 2020 (IEEFA India): Indian Railways should explore the use of sections of its extensive network for electricity transmission infrastructure.

This is a key recommendation in a new report by the Institute for Energy Economics and Financial Analysis (IEEFA) that outlines the opportunity for Indian Railways to participate in the nation’s energy transition beyond its solar power generation plans.

The report, Indian Railways at the Junction, urges the national transporter to consider the feasibility of locating High Voltage Direct Current (HVDC) lines underground on suitable sections of its right of way.

“With its inhouse solar project plans, Indian Railways is on track to becoming a major renewable energy generator. And it could further support India’s energy transition by evaluating options for HVDC transmission, which could reduce encroachment on forests and farmland, as well as planning delays,” says author Charles Worringham, a researcher and guest contributor for IEEFA. Worringham points out that the abrupt changes to railway operations caused by the COVID-19 lockdown and the fall in energy demand growth have highlighted critical choices and opportunities for Indian Railways – starting with the priorities to deal with a highly congested network.

Prior to COVID-19, 40% of lines and all of the important freight routes were operating at above 100% of line capacity due to severe congestion on the network, but the suspension of passenger services during the pandemic has seen the movement of more freight and a greater diversity of cargoes, at twice the speed, bringing in new revenue and improved service.

“The ability to deliver a broader range of freight ranging from vehicles to manufactured goods and perishable agricultural produce much more rapidly is in tune with the needs of India’s changing economy,” says Worringham, “but it was an accidental outcome of the pandemic.

“To maintain these new freight services and speeds when passenger traffic resumes will require Indian Railways to make some hard choices about what kinds of freight have priority. Congestion won’t be fixed by new rail projects alone.”

These choices should include rethinking plans to expand the movement of coal – which already makes up nearly half of India’s bulk rail freight, according to the report. Lower energy demand growth combined with dramatic cost reductions for solar have increased the logistical costs and financial risks of increasing coal freight, says Worringham.

“Revised electricity demand forecasts mean that much less thermal coal will require transport than Indian Railways has been planning for, and there are real risks of over-building coal evacuation infrastructure at a time when thermal coal demand is plateauing.”

And with Railways Minister Piyush Goyal calling for transformation and electrification, the recently restructured Railways Board in the process of adopting a National Rail Plan and the new economic conditions, now is the moment for Indian Railways to embrace innovation, re-prioritise freight services, and explore a new role in transmission of electricity.

Though underground cables are generally much more costly to build than overhead cables, the use of existing rail right-of-way in India at scale could bring down these additional costs.

In the U.S. one HVDC project using rail right-of-way is planned to evacuate renewable energy from Iowa to Chicago, and another will bring energy from the Canadian border to New York City making use of HVDC buried beside railway lines, as well as roads and beneath the Hudson River.

U.S. president-elect Joe Biden has advocated the use of road and rail corridors for transmission infrastructure, in part to reduce delays in obtaining permissions required from private landholders and public authorities, a problem in both the U.S. and India.

“Along with the renewable energy projects already completed and those expected in coming years, the ubiquity of potential routes in almost all renewable energy regions and load centres should make cooperation between PGCIL and Indian Railways on one or more demonstration projects a high priority,” says Worringham.

“And post-COVID, re-thinking how Indian Railways best supports not just economic recovery but economic transformation together with energy transition is paramount.”

Read the report: Indian Railways at the Junction