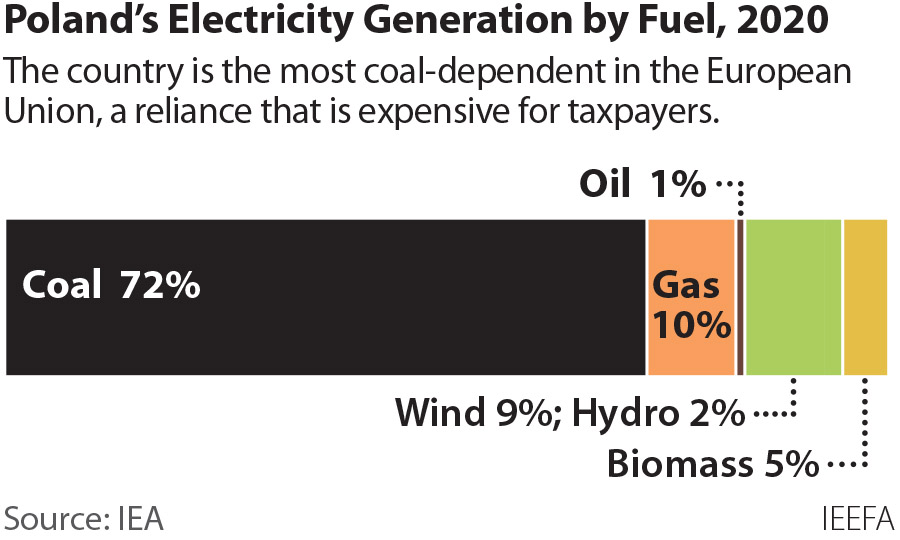 10 Jan. 2022 (IEEFA Europe) – Poland’s dependence on coal is costing Polish taxpayers dearly, but the Polish government remains reluctant to shift to clean energy sources, according to a report by the Institute for Energy Economics and Financial Analysis.

“If a coal phaseout is achieved by 2030, the resulting savings would enable Poland to build twice as much clean electricity generation than currently envisaged under PEP2040,” said Mihaela Grubišić Šeba, an IEEFA energy finance analyst and the report’s lead author.

According to IEEFA’s analysis, a coal phaseout by 2030 would save at least €141 billion for Polish taxpayers and help move Poland away from being one of the European Union’s most polluting nations. The figure could be even higher—approaching or even exceeding €200 billion—if carbon prices rise and Poland fails to retire its plants.

Currently, Poland is the most coal-dependent country in the EU, relying on the fossil fuel for 70% of its power generation. In 2020, it was responsible for almost one-third of all coal-fired electricity in the EU. 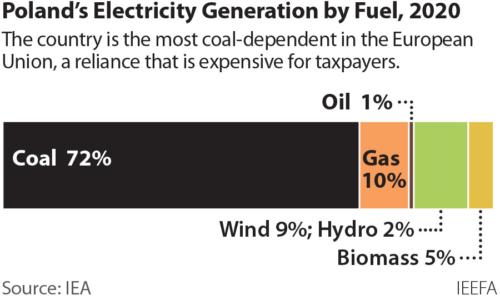 In December 2020, a new binding target was set across EU countries to cut greenhouse gas emissions by 55% by 2030, compared to 1990 levels. In light of the new target, three of Poland’s partly state-owned companies declared plans to transfer of stranded coal assets to a soon-to-be-formed national energy security agency.

“PGE, Tauron and Enea plan to transfer their stranded assets in 2022, but the transfer does not make economic sense, especially considering the wider costs of coal,” said Arjun Flora, IEEFA Europe’s director of energy finance studies and co-author of the report. “This strategy appears to be a repeat of a 2016 state bailout plan applied to the Polish mining industry, and ordinary taxpayers will foot the bill.”

PEP2040, a roadmap of Poland’s energy future, includes a transition plan for coal regions, a nuclear power program and new offshore wind projects. According to IEEFA, the project costs could be completely covered by excess costs incurred by extending coal power.

Former Energy Finance Analyst Mihaela Grubišić Šeba focuses on Eastern and Southern Europe. She has 19 years of experience in research, consulting and banking, including with IFIs. She has a PhD from the University of Zagreb and a CFA charter from the CFA Institute.