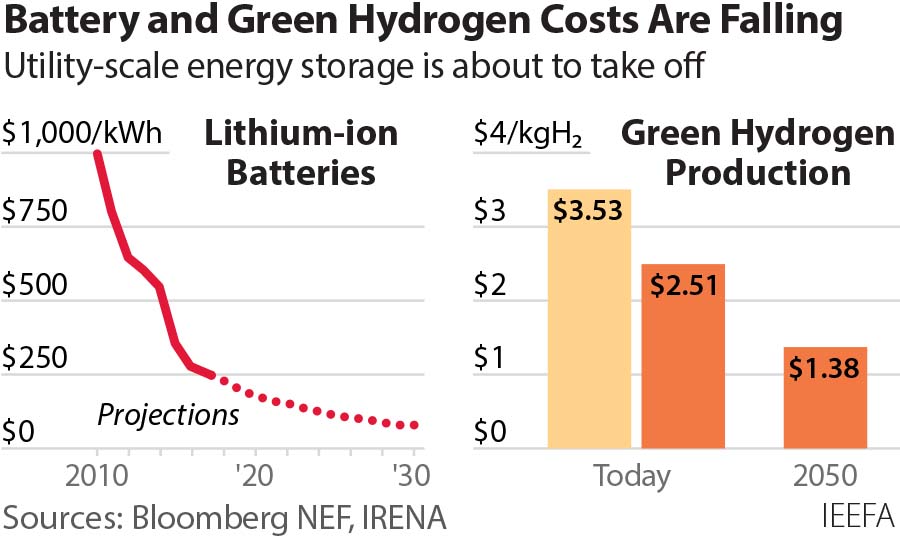 21 October (IEEFA India): Battery storage and green hydrogen – markets that are critical for India’s renewable future and energy security – could scale up rapidly in the country, bolstered by government policy and private company ventures, according to a new briefing note from the Institute for Energy Economics and Financial Analysis (IEEFA).

“The Government of India is giving the right push for the Battery Energy Storage Systems (BESS) market through production-linked incentive schemes, big battery storage capacity tenders and improving the market structure to be more competitive.”

“By acquiring Norwegian solar module manufacturer REC and a 40% stake in India’s Sterling and Wilson Solar, Reliance is already showing it’s serious about delivering on its ambition to lead renewable energy investment in India,” he says.

“India’s battery market could boom quickly,” Shah adds, “just as we have seen happen in other markets such as the U.S. and Australia.”

To date, the cost of grid-scale battery storage has been prohibitive for India which does not yet have a domestic battery manufacturing value chain, but globally the cost of battery storage has reduced dramatically – from US$1,100/kWh in 2011 for a standalone lithium-ion battery set-up, the price is projected to drop to US$58/kWh by 2030. Momentum in the energy storage market

The note also points to positive signs that the market in India is gearing up for batteries with growing momentum from private power companies. Tata Power’s 10MW/10MWh (1-hour storage) battery in its Delhi distribution network is currently the only grid-scale battery operating in India but the company’s upcoming storage project in Ladakh – comprising 50MWh of storage capacity co-located with 50MW of solar capacity – will be India’s largest battery.

In another policy development, the Central Electricity Regulatory Authority (CERC) aims to bring battery storage and pumped hydro storage (PHS) into the ambit of the frequency control and ancillary services (FCAS) market.

“Valuing the speed and accuracy of grid balancing services that batteries and PHS could provide at competitive market prices will allow a clear revenue stream for the owners of these storage assets,” says Shah.

“As with batteries, the green hydrogen industry will require the building of a domestic hydrogen production value chain,” Shah says. “The most important part of this value chain is the electrolysers for which the costs have come down across the globe, led by makers in the U.S., China and Scandinavia.”

Electrolyser costs have come down across the globe, led by makers in the U.S., China and Scandinavia

The note points out that to support this value chain, the government plans to implement a green hydrogen consumption obligation (GHCO) mechanism in fertiliser production and petroleum refining, similar to the renewable purchase obligation (RPO). To further encourage usage of green hydrogen by industries, the fuel has been included under the RPO regulations.

There is also interest in developing industrial clusters that pair green hydrogen production with its industrial use, such as hubs of steel, coal, fertiliser, biogas, and heavy transport.

“These are all industries that have much to gain from a transition to green hydrogen,” says Shah. “Similar clusters are under development in the Netherlands, Germany, the UK and Australia.”

Read the report: Batteries and Green Hydrogen: The Next Chapter in India’s Clean Energy Story