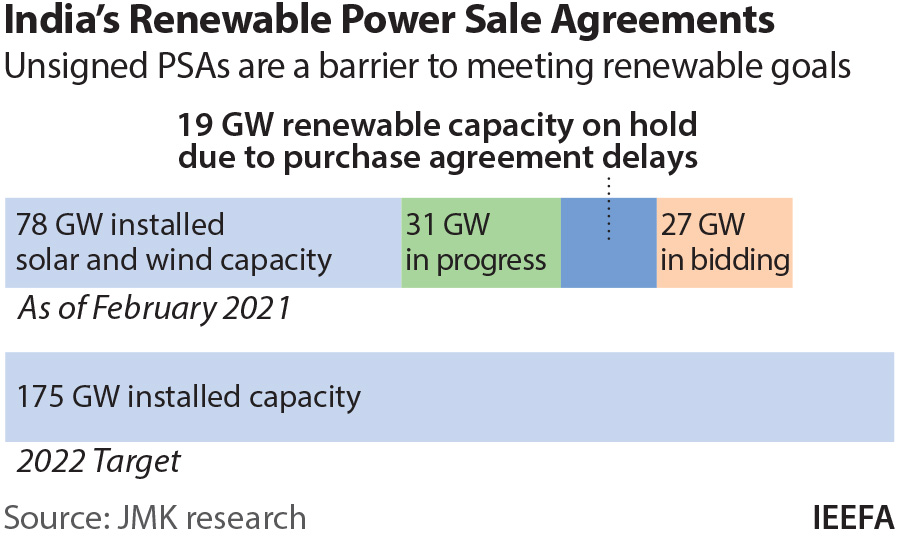 7 April 2021 (IEEFA India): Delays in signing power sale agreements (PSAs) are a bottleneck in the growth of renewable energy capacity in India, jeopardising the government’s renewable energy target of 175 gigawatts (GW) by 2022, dampening investor confidence and threatening the viability of projects, finds a new briefing note from the Institute for Energy Economics and Financial Analysis (IEEFA) and JMK Research. PSAs for nearly 19GW of renewable energy capacity tendered by Solar Energy Corporation of India (SECI) are yet to be signed by state-owned distribution companies (discoms). Manufacturing-linked solar projects account for the majority (63%) of this capacity.

“This situation is having an adverse impact on the morale of project developers and investors and is slowing overall progress on renewable energy installation,” says co-author Vibhuti Garg, IEEFA Energy Economist, Lead India.

The missing link of PSAs affects the entire value chain

“The missing link of PSAs affects the entire value chain. For example, without the assurance of the offtake of power for auctioned renewable energy projects, it becomes virtually impossible for developers to secure debt financing.”

Developers with SECI-tendered projects in their pipelines awaiting PSAs include Adani, Azure Power, ReNew Power and Greenko, which together form 78% of the total capacity in limbo, according to the note.

On average, 37% of the entire (installed and pipeline) project portfolios of these prominent developers is SECI-tendered projects with non-executed PSAs.

“This significant share of capacity poses a substantial risk to the overall conversion of projects in the pipeline,” says Garg.

The note points to falling solar tariffs, driven by declining solar module prices, as a key reason for the discoms’ reluctance to sign PSAs – and in a few cases attempts to renegotiate or renege on wind and solar power purchase contracts.

“In 2020 we saw solar tariffs hit a record low of Rs1.99/kWh. Discoms are anticipating that solar module prices will decline further, leading to a reduction in future solar auction tariffs, so they are delaying signing PSAs at higher prices,” says co-author Jyoti Gulia, Founder JMK Research.

“However, with electricity demand now picking up and the imposition of 40% basic customs duty on solar modules, tariffs will be unlikely to fall further in the near-term.”

In fact, says Gulia, with tougher penalties and enforcement of Renewable Purchase Obligations (RPO) under the draft Electricity Act (Amendment) Bill 2020, discoms would have to procure power from renewable sources.

The Ministry of Power’s Bill also proposes setting up a body to enforce contracts between generating, distribution or transmission companies.

The authors also suggest other measures to persuade discoms to sign PSAs. These include setting a PSA signing deadline for all renewable tenders, requiring all discoms to devise long-term plans estimating the amount of renewable energy capacity to be integrated into their power mixes each year, and SECI seeking assurances from discoms on purchase of power before planning auctions.

The authors also suggest evaluating the option of ‘tariff pooling’, where a weighted average is taken from tariffs discovered in SECI auctions over six months, to eliminate the advantage gained by discoms that secure PSAs at relatively low tariffs. And tariff renegotiation – but only as a last resort option “under specific market conditions”.

India must look for ways to speed up renewable energy installation

“Expediting the signing of PSAs would not only free up a major share of ‘on-hold capacity’ but also reinvigorate the industry and the stakeholders who have been impacted.”