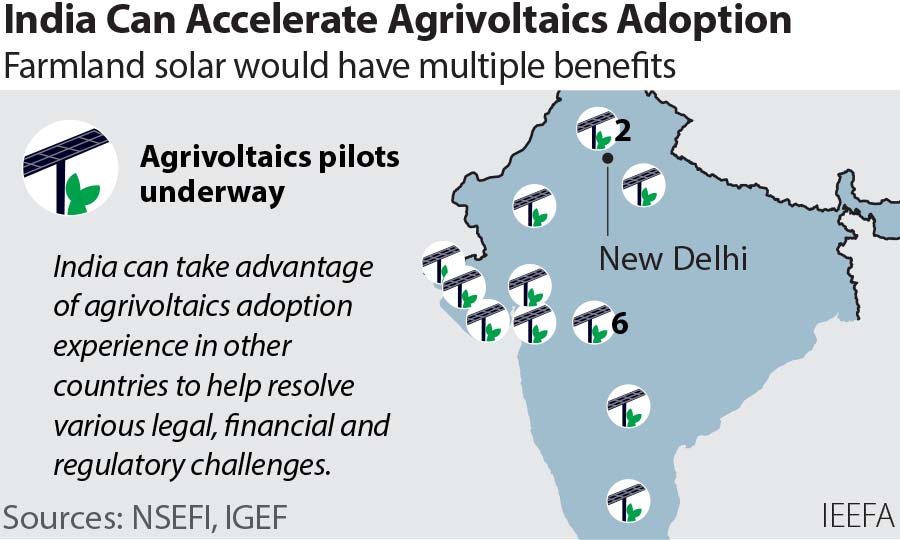 8 December (IEEFA India): Agrivoltaics, the practice of generating solar power on farmland in ways that complement agricultural production, could become an important new renewable energy sector in India, according to a new report from the Institute for Energy Economics and Financial Analysis (IEEFA).

But for the sector to thrive, measures to safeguard farming communities and agricultural production should be a key part of the policy and regulatory reforms that the sector needs, says report author and IEEFA guest contributor Dr Charles Worringham.

The report, Agrivoltaics in India: Fertile Ground?, outlines three major national challenges that agrivoltaics could help address: accelerating the renewable energy roll-out by distributing it throughout the country at a variety of scales; relieving the pressure of renewable energy facilities on sensitive lands and ecosystems; and contributing to a stronger and more diverse rural economy.

Noting that experience elsewhere has shown that certain crops can tolerate moderate shading from solar panels, and that during extreme heat some may even benefit from lower temperatures and improved soil moisture, Worringham points to the features that work in India’s favour.

With nearly 20 projects underway using a variety of panel configurations, India has already started a research effort to establish what specific methods, crops and conditions work best, at commercial facilities and public bodies such as the Central Arid Zone Research Institute.

“India has a much higher proportion of its land under farming than most countries,” Worringham says, “so there is plenty of scope to move beyond the experimental stage and see agrivoltaics really grow.”

Worringham notes wide agreement on some necessary reforms. A new agrivoltaic land-use classification is essential, as farmland must generally be reclassified for commercial use if it is to host any solar generation.

“A classification based on the definition used by the French, of an agrivoltaic project as one that is primarily agricultural, and secondarily produces solar energy, and creates synergies between the two would be a good starting point for a special class of land use,” he says. 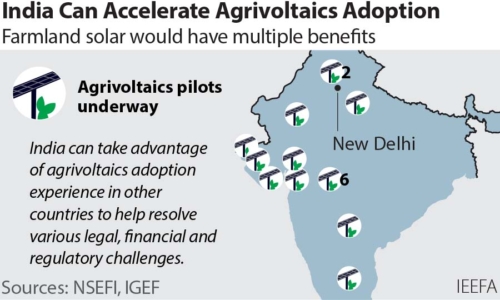 This type of renewable energy generation is quite distinct from large, utility-scale solar parks. Farming communities could benefit not only from additional income from selling any power they generate, the report notes, but in some cases could use some of that power to add value to their produce and reduce wastage, for example by powering drying, cleaning, milling, local refrigeration and establishing cold chains.

“While India has made huge strides in rural electrification and farmers have benefitted from lower tariffs and initiatives such as the PM-Kusum scheme, power on the periphery of the grid can still be unreliable,” he says.

“But if, for example, a Farmer Producer Organisation in such an area owned and operated an agrivoltaics project, they might use some of the electricity to enhance the value of their produce, and we suggest that new policies should prioritise retention of land and ownership of the project by farmers themselves, and be flexible enough to allow sale of the power or self-consumption.”

In a fast-moving field like agrivoltaics, India enjoys another advantage in being able to select from the technical and policy developments that have been hard-won elsewhere.

“Not only are specific types of panels and panel support systems now becoming available, experiments using different panel configurations could be especially beneficial in Indian conditions,” he says.

The report describes a novel panel configuration being tested in India as well as Germany and Sweden, using bifacial panels, which generate power when sunlight strikes either side. When mounted vertically, like fences, facing east and west, they produce peak power in the morning and afternoon unlike horizontal panels that peak at midday.

“This configuration can help the grid by producing power closer to peak demand time, which is typically in the evening. This might allow certain loads like residential cooling to be brought forward a little and use that power directly, or by shortening the time between generation and use, make battery storage easier and more flexible,” says Worringham.

“For farmers, this layout can give better access for machinery and allow panels to stay cleaner for longer.”

The report also highlights policies and rules that other countries have introduced, some of which may transfer well to Indian circumstances.

“It’s very important that India protects productive agricultural land. Other countries have found out the hard way that unregulated agrivoltaics can lead to problems, such as when Taiwanese rice-farmers crammed in too much solar capacity because the power made them much more money than their crops.

“The government had to step in and allow projects only where any decline in yield is within specified limits, and set regulations such as minimum panel heights. Japan and various U.S. states have similar regulations. The Union ministries and states can benefit from these experiences by crafting sensible rules at the outset.”

Other recommendations in the report address financial incentives, governance and standards.