December 14, 2020 (IEEFA) — European pipeline companies are using a loophole to market themselves as low-carbon businesses and avoid reporting on the climate effects of the natural gas they transport, according to a new report from the Institute for Energy Economics and Financial Analysis (IEEFA).

“This loophole makes it much easier for TSOs to market themselves as leaders of the energy transition, aligned with European Union emission reduction targets,” said Arjun Flora, an IEEFA energy finance analyst and co-author of the report. “They are talking about net-zero targets while completely ignoring their largest source of emissions – end-use of the fossil fuel gas they transport. By raising billions of euros in ‘sustainable financing,’ they are diverting investor funds from more sustainable energy value chains.”

This behaviour allows the five TSOs studied to under-report emissions by a factor of at least 100. It also prevents potential investors from visualising the magnitude of emissions reduction efforts.

“TSOs are really missing an opportunity to demonstrate their commitment to energy transition,” said Flora. “By providing full disclosure they could set meaningful targets and demonstrate a successful transition to zero-carbon gases over the coming decades.”

The position of the TSOs is in contrast to upstream fossil fuel exploration and production companies. Eight of the largest 39 oil and gas production companies, for example, already target reduced emissions from the downstream use of their products, allowing investors to measure real progress made in meeting renewable energy goals.

Gas TSOs only provide transport and storage services. They do not own the natural gas that they transport. However, their entire business is built to distribute fossil fuel, primarily methane, a major greenhouse gas, which emits another greenhouse gas, carbon dioxide, when burned. Moreover, as members of the European Network of Transmission System Operators (ENTSOG) they are highly influential in deciding which energy infrastructure projects qualify for public EU funding, under a regulation called TEN-E. This regulation is under review, with a proposal due to be published this month. Campaign groups such as Global Witness have called for ENTSOG to be stripped of these powers, given their obvious conflict of interest, and for gas projects to be disqualified, given their reliance on unproven decarbonisation strategies that risk locking in fossil fuel use.

All five TSOs studied in the report—Snam (Italy), GRTgaz (France), Enagas (Spain), National Grid (United Kingdom) and Fluxys (Belgium)—are members of ENTSOG. All began life as vertically integrated gas companies and are touting investments in alternative fuels such as biomethane and hydrogen. None are reporting emissions from use of fossil fuels flowing through their pipelines.

“By not reporting the end-use carbon emissions of the gas they transport, these TSOs are effectively saying that they do not care how the gas is used, including whether it is burned, emitting carbon dioxide, or used in other ways that entail lower emissions. Such indifference is outdated in the energy world in which we live today,” said Gerard Wynn, a co-author of the report and IEEFA finance consultant.

The report noted that in November 2020, Italy-based Snam committed to be “net zero” by 2040. However, the company did not consider end-use emissions, and clearly has no intention to stop transporting the fossil fuel natural gas by 2040. The term “net zero” was coined by the 2015 Paris Agreement on climate change, referring to the global goal of reaching zero net greenhouse gas emissions in the second half of the twenty-first century, and sooner in more affluent countries, for a post-fossil fuel economy.

“It is nonsense for a company to refer to plans to continue transporting fossil fuels as a net-zero goal,” said Wynn. “Snam’s statement highlights the insufficiency of carbon reporting rules for gas TSOs today.”

Actual emissions from burning fossil gas versus the carbon content of transported gas, 2019 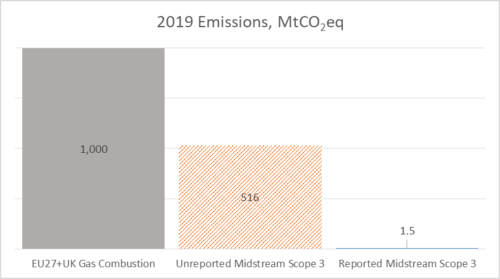 Change in Total Reported and Unreported Emissions, 2019 vs 2017 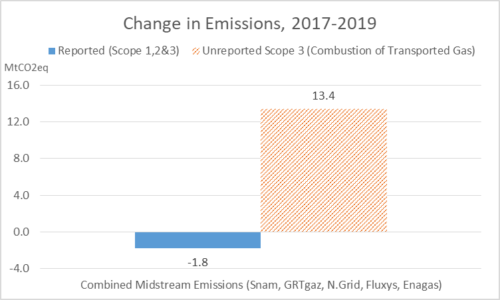 Gerard Wynn ([email protected]) is an IEEFA finance consultant based in London.