The report, “Exelon’s Proposed Acquisition of Pepco: Corporate Strategy at Ratepayer Expense,” says that if the merger is allowed by the District of Columbia Public Service Commission it would likely result in higher costs to ratepayers. 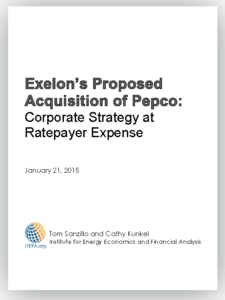 IEEFA says that the merger, if approved, would probably also thwart the district’s renewable-energy initiatives, and its long-term risks would far outweigh any short-term benefits Exelon has promised.

The report, by Tom Sanzillo, IEEFA’s director of finance, and Cathy Kunkel, an IEEFA fellow, notes also that the merger would introduce new regulatory challenges. “The acquisition would make it more difficult for the District of Columbia Public Service Commission to effectively regulate Pepco,” Kunkel writes in a commentary accompanying the release. “Exelon’s corporate priorities are bound to be determined by meeting their nuclear fleet in Illinois and elsewhere—rather than in by pleasing D.C. regulators.”

Kunkel adds that history supports this assertion: “Our report provides several examples of other utility-company mergers that have resulted in more difficulties for regulators. In those cases, the new corporate parent was less willing than the acquired company was to follow commission precedent and more resistant to taking direction from state commissions.”

“Any plusses being put forth about this proposed merger are heavily outweighed by the negatives,” Sanzillo said. “Exelon stands to benefit enormously. Ratepayers do not.” The study notes that Exelon also faces financial challenges that would likely be passed on to Pepco customers should the deal go forward.

“The company’s stock price has dropped, its dividend has been reduced, its credit ratings are stagnant, and it faces a worrisome outlook based on rising nuclear power costs from aging plants,” the report says.

“The $2.5 billion acquisition premium further puts Pepco customers at risk because Exelon must earn returns high enough to justify the premium. This translates into a significant risk for Pepco’s customers of rate increases and service cuts.”

FULL REPORT
_____________________
Cathy Kunkel and Tom Sanzillo are available for press interviews.
Contact: Karl Cates at [email protected] or 917-439-8225
______________________
About IEEFA
The Institute for Energy Economics and Financial Analysis (IEEFA) conducts
research and analyses on financial and economic issues related to energy and the
environment. The Institute’s mission is to accelerate the transition to a diverse,
sustainable and profitable energy economy and to reduce dependence on coal and
other non-renewable energy resources.