Feb. 29, 2016 (IEEFA) — China has formally confirmed two new clean-energy world records in 2015—one for installing a record 32.5 gigawatts (GW) of wind in a single year, and the second for installing 18.3 GW of solar, both higher than initial estimates. Coal consumption fell 3.7% year on year (yoy) on the back of just 0.3% yoy electricity production growth and a rapid diversification of China’s electricity generation capacity.

“The latest figures confirm China’s record-breaking shift toward renewable power and away from coal,” said Tim Buckley, Director of Energy Finance Studies at the Institute for Energy Economics and Financial Analysis (IEEFA). “Solar and wind continue to be the big winners, as illustrated by a 73.7% increase in grid-connected solar generation capacity. Declining consumption coupled with an over-abundance of domestic supply, meaning coal imports into China were particularly badly hit, dropping 30.4% yoy.”

While these figures are largely consistent with initial estimates for the 2015 year, the official Chinese National Bureau of Statistics confirmation yet again highlights that global electricity markets “are transforming a great deal faster than anyone actually expected,” said Buckley.

“China’s official 2015 wind installations are an all time global record of 32.5GW, 30% ahead of even the most optimistic forecasts by financial markets made only a year ago. China itself is the only nation to have come anywhere near this, delivering 20.7GW of new installs in 2014,” he said.

“The National Bureau of Statistics also reported 18.3GW of grid-connected solar installations in 2015,[i] again surpassing the previous world record of 12.9GW set by China in 2013. The 14.9GW of hydro electricity and 6.0GW of nuclear capacity installs by China in 2015 round out a year of rapid grid generation diversification.

“IEEFA forecasts that China will install an additional 22 GW of wind, 16GW of new hydro, another 6GW of nuclear and 18GW of solar (60% utility scale, 40% distributed rooftop solar) in 2016. With electricity demand forecast to grow by 3.0-3.5% yoy in 2016, this 62GW of additional zero carbon electricity capacity will be more than sufficient to meet total electricity demand growth, such that coal consumption is forecast to fall again in 2016,” he said.

At the same time as China is setting new global renewable energy records, rapidly improving energy efficiency is combining with an ongoing structural change in the nature of Chinese economic growth (2015 GDP growth was +6.9%), decoupling it from the growth of electricity demand (of +0.5% yoy). Tertiary industry was 50.7% of economic activity, for the first time exceeding 50% (up from 48.1% in 2014).

There is no suggestion that China in 2016 might back away from this electricity sector transformation. Only last Friday, China’s State Grid Corp. Chairman Mr Liu Zhenya (the head of the world’s largest power provider) said his company rejects the so-called all-of-the-above energy strategy to meet China’s evolving power needs and address climate change. Liu argues it’s better to move on to the next generation of energy technologies and that China believes it might as well start now. Liu concluded that the only hurdle to overcome is mindset: “There’s no technical challenge at all.”[iii]

Tim Buckley is IEEFA’s director of energy finance studies, Australasia for IEEFA. He has 25 years of financial markets experience, including 17 years with Citigroup, including as as managing director, head of Australasian equity research. 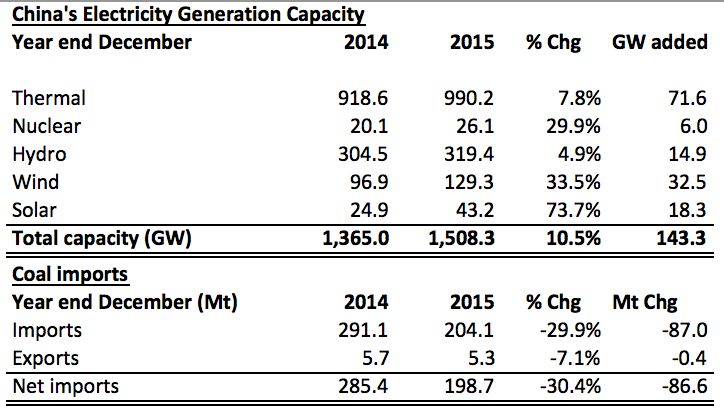