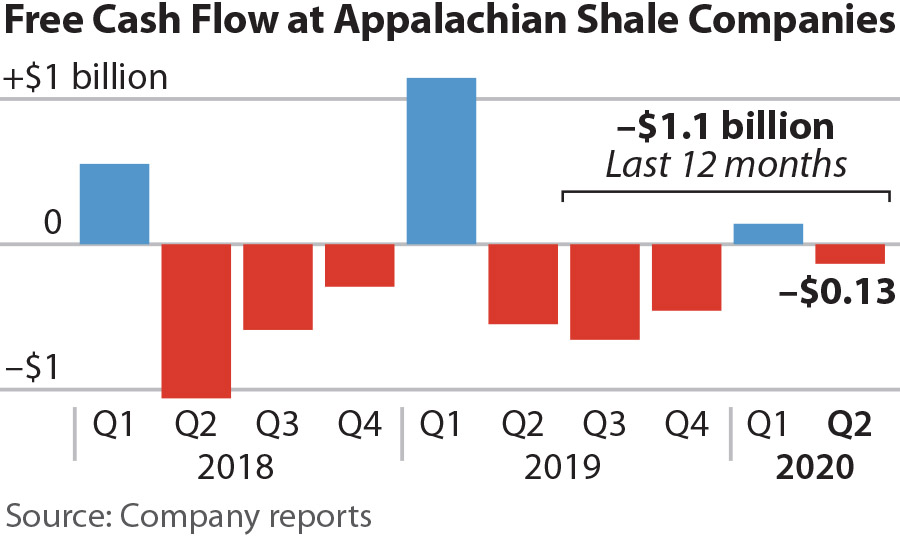 September 10, 2020 (IEEFA) — Even after cutting capital expenditures to their lowest quarterly point in more than six years, nine Appalachian shale-focused gas producers continued to hemorrhage money, reporting more $134 million negative free cash flows in the second quarter of 2020.  Together, they have spilled $1.1 billion in red ink over the past twelve months.

The exploration and production (E&P) companies attempted to cut losses by reducing capex spending to $1.9 billion, a 35% drop from the previous year, and hedging through derivatives and other financial instruments. Reductions in U.S. gas output also boosted prices during the second quarter of 2020, partially offsetting the pain of gas prices that plunged to $1.63/MMBtu, the lowest price in decades.

Although some fracking companies enjoyed modest increases in their stock prices, the long-term collapse in their market value was only slowed—not halted. Antero Resources has lost 90% of its value over the last five years, with its market capitalization falling from $9.8 billion to $790 million. The nation’s largest gas producer, EQT, has suffered a 74% decline in its market cap. And Chesapeake Energy, one of the pioneers of the fracking industry, filed for bankruptcy during the second quarter.

“Appalachian shale producers are in extremis,” noted Kathy Hipple, lead author of the report. “The ongoing global gas glut and persistently low gas prices have been punishing to these companies. Their outlook remains extremely weak.”

The continued decline in the fortunes of the Appalachian fracking business has spooked more than a few producers. Gulfport Energy is warning it may become the latest gas producer in the region to file for bankruptcy if it can’t restructure its debt. Other companies are adding royalty sales to the hedging and capex cuts in hopes that the industry will turn around. The chief executive of EQT, the country’s largest gas producer, said they expect to operate “at a maintenance level for the next several years.”

Shell, which had spent $4.7 billion in 2010 to acquire 400,000 acres of gas assets in Pennsylvania, bolted for the exit door this quarter, selling its remaining interests during the quarter for $451 million. Lenders and investors would be wise to consider an exit strategy, as well.

“Despite their best efforts to rein in capital spending, these companies’ free cash flows remain negative – as they have been for most of the past decade,” said co-author Clark Williams-Derry. “They have yet to prove the business case for fracking.”