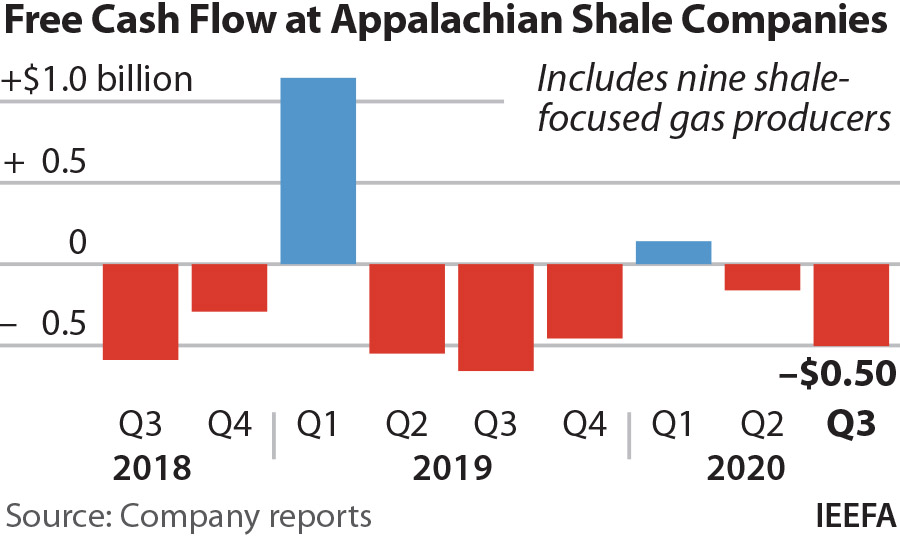 December 3, 2020 (IEEFA)—Even after cutting their capital expenditures (capex) by more than one-third from the previous year, nine shale-focused gas producers in Appalachia spent a half-billion dollars more during the third quarter on drilling and building projects than they earned from selling oil and gas.

Capex investments during the third quarter were the lowest in at least six years, according to an analysis by the Institute for Energy Economics and Financial Analysis (IEEFA). The analysis found eight of the nine frackers in the sample cut capital spending from the previous year’s level; Range Resources cut its quarterly capital costs to $72 million, a 60 percent reduction from the $178 million it spent during the third quarter of 2019. Only National Fuel increased capex during the quarter, primarily because it bought Shell’s dry gas assets in July.

The reduced capex investments have been one part of a two-pronged strategy that has barely kept some Appalachian frackers afloat as they struggle to survive weak demand and low prices. Several producers have resorted to financial hedging strategies in hopes of achieving positive free cash flows. EQT, which cut its quarterly capex by 40 percent from 2019 levels, reported making $252 million from commodity derivatives during the third quarter.

“The shale revolution has turned the U.S. into the world’s most prolific gas producer,” said Kathy Hipple, an IEEFA energy analyst and co-author of the briefing note. “Yet in financial terms, the gas production boom has been an unmitigated financial bust, with most fracking-focused companies, including major Appalachian gas companies, regularly reporting negative free cash flows.”

Other ominous signs were apparent. Besides Shell’s “fire sale” of its Appalachian assets, ExxonMobil appears likely to include some of its North American gas assets in a planned fourth-quarter impairment that could reach $20 billion. And while Henry Hub natural gas prices rose during the quarter, prices at the Dominion South hub—where Appalachian gas is often priced—were less than three-quarters of the Henry Hub price at the end of the quarter.

Appalachian gas producers also curbed gas output, but relief isn’t likely to arrive soon. The U.S. Energy Information Administration expects that gas consumption will be down by 2 percent this year and another 5 percent next year.

“Without a sustained price rebound and renewed capital investments, market watchers can expect Appalachian gas producers to continue to shrink, both in their gas output and in their financial health,” said Clark Williams-Derry, an IEEFA energy analyst and co-author of the note.