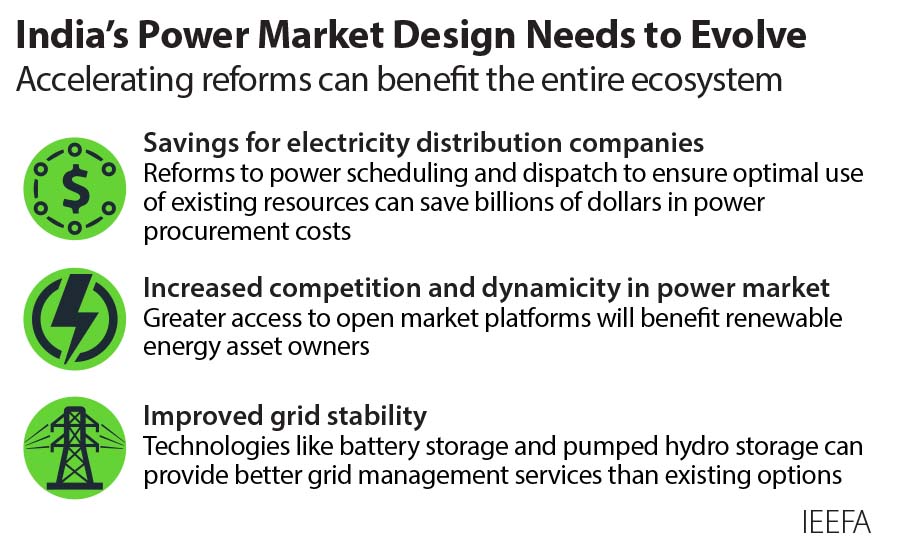 25 August (IEEFA India): The transition to a resilient electricity grid with increasing amounts of cheaper, variable renewable energy will require reforms to the scheduling and dispatch of power, some of which can potentially help electricity distribution companies (DISCOMS) save billions of dollars, finds a new report by the Institute for Energy Economics and Financial Analysis (IEEFA).

“India added a record 15 gigawatts (GW) of renewable energy capacity in the fiscal year 2021/22 and this rate of clean energy installation will need to accelerate further for the country to meet its climate targets. Managing large amounts of variable renewable energy sources such as solar and wind on the grid requires new technical and financial solutions,” says the report’s author Kashish Shah, Research Analyst, IEEFA.

Managing large amounts of variable renewable energy sources such as solar and wind on the grid requires new technical and financial solutions.

Currently, 90% of the electricity traded in India is through long-term power purchase agreements (PPAs). However, the two-part tariff structure of thermal power PPAs has locked DISCOMs into long-term capacity payments. Combining this with self-scheduling of power dispatch at a regional level by the DISCOMs restricts sharing of generation resources at a country level. This results in a sub- optimal outcome as expensive power plants are utilised more, resulting in higher power procurement costs for DISCOMs.

The report notes that policymakers are trying to address this issue through various models of power dispatch. A Security Constrained Economic Dispatch (SCED) pilot pooled 58.1GW of inter-regional thermal power stations and recorded a saving of Rs20.7 billion (US$260 million) between April 2019 and February 2022.

“There has been no update on the proposed pilot of the MBED mechanism. If the CERC has not yet staged the pilot, it should do so at the earliest as it would significantly improve cost and resource efficiency,” says Shah.

The report also recommends that policymakers increase the share of open market platforms in the electricity market, which would help the renewable energy sector.

“The introduction of competitive day-ahead and term-ahead markets to trade clean power on open market platforms has been quite successful. There are three different power exchanges – Indian Energy Exchange, Power Exchange India and Hindustan Power Exchange – that facilitate the trade of green power in the country. In our view, a larger shift to open markets will allow competition and add dynamicity to electricity trading,” says Shah.

“The CERC’s new regulation for Frequency Control Ancillary Services (FCAS) paves the way for a competitive and modern mechanism. India should move to the new mechanism sooner rather than later.”