IEEFA Latin America: Indications, in the Activity of an Italian Company, of How Emerging Markets Are ‘Skipping a Generation’ and Going Straight to Renewables 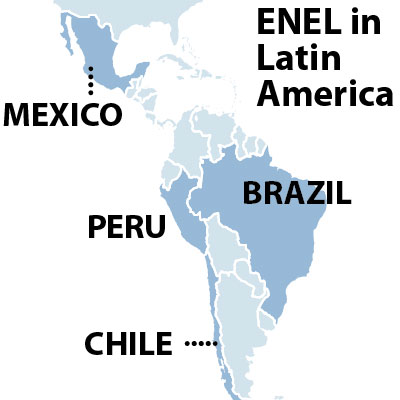 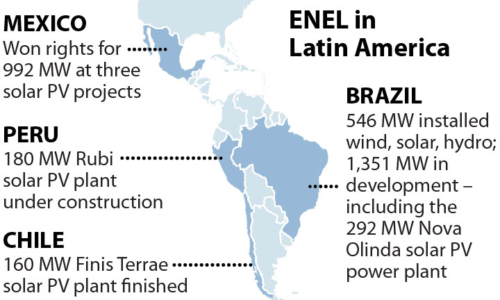 In its updated plan for 2017-2019, the Italian utility ENEL SpA has expanded its earnings targets with an aggressive capital-expenditure program for 6.7 gigawatts of renewable energy capacity. And that’s just over the next three years, which probably makes ENEL the largest single investor globally at the moment in such capacity.

The company plan, announced in late November, has ENEL switching to a less capital-intensive “build, sell and operate” (BSO) business model that will allow it to gain returns on its renewables pipeline more quickly, reduce its overall risk profile and crystallize value creation earlier.

When measured on a five-year annualized basis (2011-2015), both dividend per share and earnings per share growth at ENEL ranked in line with the industry averages relative to the company’s peers. From a shareholder perspective, however, ENEL offers significant value now because its new plan offers both higher EBITDA (earnings before interest, taxes, depreciation and amortization) and net income for the 2017-19 period and works to actively reduce stranded-asset risk.

From a global utility perspective (see the related item we posted today from Goldman Sachs), ENEL is adopting a shrewd strategy tied to the growing momentum behind renewables. ENEL’s change in plans is driven by a broader framework that includes further investment in developing countries in South America and Africa and that rides a wave of technology. This push includes adoption of smart grids, digitalization, improved connectivity and better electric transport. ENEL means to put massive capital investment in smart meters, part of a series of grid modernizations that will drive lower emissions and more efficiency.

ENEL’s chief executive, Francesco Starace, says the evolution of the company’s renewable business will occur in three phases. Phase 1, which has been unfolding  for a decade already, centers on creating powerful government incentives toward transition. Phase 2 is tied to a shift in capital market behavior by which renewables are becoming an increasingly superior investment. Phase 3 will tap into the strength of maturing renewables markets and related industrial growth.

Worth acknowledging in this thinking is that emerging markets are skipping a beat and going straight to renewables rather than being bogged down by old fossil-fuel models.

ENEL aims to be a player in this transformation, which stands to gain momentum as growth in developing economies outpaces more industrialized nations. The International Monetary Fund has advanced economies growing by 1.7 percent annually until 2021. Growth rates in emerging markets, by contrast, are expected to range from 2 percent to 3.5 percent. These are the very places IEEFA sees the renewables transition taking deep root already.

In Brazil, ENEL through its subsidiary ENEL Green Power Brasil Participações Ltda. (EGPB), has started construction on the 292-megawatt Nova Olinda solar power plant, a $300 million project that will be the biggest in Latin America once it comes on line. EGPB currently has a total installed capacity of 546 megawatts, of which 401 come from wind, 12 from solar and 133 from hydro. The company has an additional 442 megawatts of wind, 102 of hydro and 807 of solar in its development pipeline.

In other markets in Latin America this year, ENEL was awarded a 180-megawatt solar project in Peru and almost 1-gigawatts of projects (at then record low tariffs) in Mexico.

It is not overstating it to say that when ENEL speaks people listen. The company’s bet on renewables in emerging markets will very likely be mimicked by many others.