IEEFA Update: Is India ready to compete with China in solar module production? 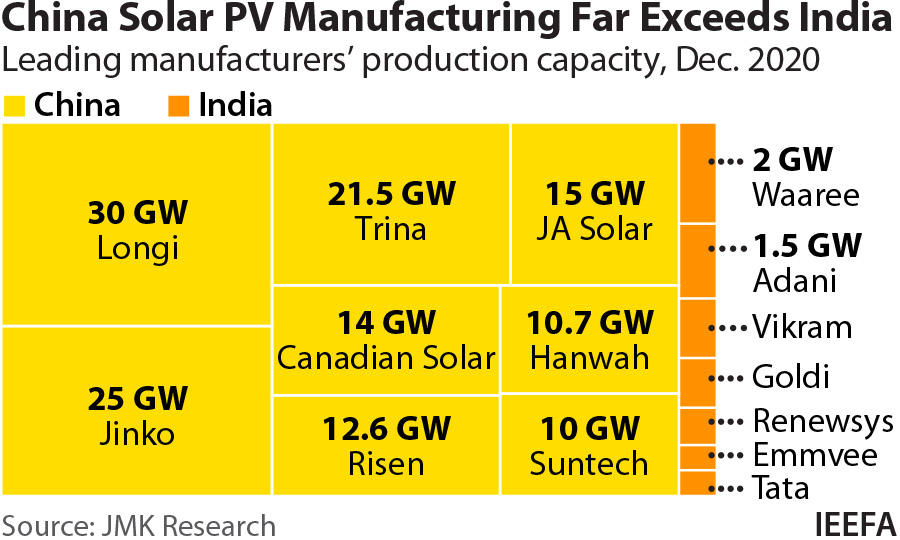 India was one of the largest exporters of best-in-class modules until 2011. In order to boost domestic manufacturing, the Indian government initiated various policy measures like the National Solar Mission in 2010 and the Modified Special Incentive Package Scheme (MSIPS) in 2012. To lend further assistance to the stressed sector, the government introduced certain measures such as the Domestic Content Requirement (DCR) in 2014 and the Safeguard Duty (SGD) in 2018 to dampen the influx of cheap foreign imports.

In 2019, the government announced the PM-Kusum Scheme and the Solar Rooftop Program. To be eligible to benefit from Central Financial Assistance (CFA) and other government incentives, projects are required to install only domestically produced modules. In late 2019, Solar Energy Corporation of India (SECI) came out with a project development tender for 12GW and within that a tied contract for 3GW of domestic module manufacturing capacity. Faced with the issue of finding offtakers for this power, SECI is planning to bundle this capacity with low tariff solar auctions that were bid out in 2020.

In November 2020, the Indian government gave the nod for the introduction of a Production-Linked Incentive (PLI) scheme in 10 key sectors, including the solar PV manufacturing sector, for which Rs45bn (US$603m) is allocated for investment by the Ministry of New and Renewable Energy (MNRE) in high-efficiency solar PV modules. The finance ministry has further issued an order to impose 40% and 25% Basic Customs Duty (BCD) on the import of solar modules and solar cells respectively, in effect from 1st April 2022.

Despite these measures, India is lagging behind China. India’s domestic module manufacturing growth was undercut due to lack of financing support, inconsistent government policy, lack of scale, and more importantly, the availability of low-priced, subsidised Chinese imports.

The domestic production of modules has yet to attain critical mass in India. Current production capacity is only able to meet 35% of the total annual domestic demand. The share of Indian PV module sales compared to overall global sales is so far insignificant. In addition, the capacity utilisation of domestic production facilities is only 40-45% of the estimated operational capacity is approximately 7GW. The low capacity utilisation is because of sub-scale production capacity, with the average plant size of 0.5-1GW in India compared to 3-5GW in China. CHINESE MODULE MANUFACTURERS HAVE AN EDGE AS THEY HAVE LARGER SCALE PRODUCTION FACILITIES, low dependence on imports and completely integrated facilities of modules, cells and wafers. This is also complemented by robust R&D and favourable government support. Indian manufacturers, on the other hand, are struggling with higher costs. Indian manufacturers’ Bill of Materials (BOM) is about 9% higher than that of their Chinese counterparts for Non DCR modules (modules that use imported cells) and about 20% higher for DCR modules. This is on account of Indian manufacturers having to import many of the raw material inputs, lack of scale and higher costs for fulfilling the project capex and financing options. As a result, Chinese module suppliers report larger profit shares (average 4.3%) of revenues than Indian suppliers (excluding Adani), who earn an average profit of less than 3%.

Another reason why India is lagging behind China is that the volume of exports of Indian-made solar PV products is much lower. The exports of the top four players are around 25-30% of their total trade volume, while for the other players it is a lower ~15% share. Chinese manufacturers, on the other hand, trade 66% of their production volume in the overseas market.

Furthermore, India is behind in new technology innovation as well as adoption. Typically, Chinese players have invested 1-3% of gross revenue for R&D every year. In India however, there is limited investment in R&D by the leading players.

India is behind in new technology innovation as well as adoption

SOLAR MANUFACTURING IN CHINA PRESENTS MANY LESSONS FOR INDIA INCLUDING THE NEED FOR A LONG-TERM STRATEGY. To tackle the economic slowdown and loss of jobs, the government is emphasising the need for India to become a self-reliant economy (‘aatmanirbhar bharat’) and build a complete ecosystem to boost the domestic PV manufacturing industry as a key growth opportunity for India. In order to meet its twin objectives of fueling economic growth and promoting domestic manufacturing, the government is planning to provide capital subsidy, tax breaks, custom duty exemption on imported capital goods and the machinery needed for manufacturing, along with cheaper land parcels near port areas to be developed as manufacturing hubs to facilitate export opportunities.

State governments should facilitate acquisition of land and utilities at concessional rates and expedite regulatory approvals and permissions. Furthermore, sustained innovation should be at the core of the government’s new plans and they should focus on setting up new R&D facilities and institutes to support this high growth sector, as well as encouraging global partnerships with technologies leaders.

In India, the market has valued green energy with the share price of Adani Green delivering a whooping 1200% return during the period between April to December 2020. Another such firm, Borosil Renewables, a solar glass manufacturing company, and Azure Power, have likewise both seen significantly enhanced investor interest and share appreciation.

Borosil Renewables, now a 10 year-old solar company, has increased production significantly in the last 2-3 years. The company has big plans for expansion and is betting big at India becoming a manufacturing hub for leading edge solar glass production. With the right conducive environment and government policies, Indian companies are well positioned for growth, despite fierce international competition.

This article was first published in India Climate Dialogue.