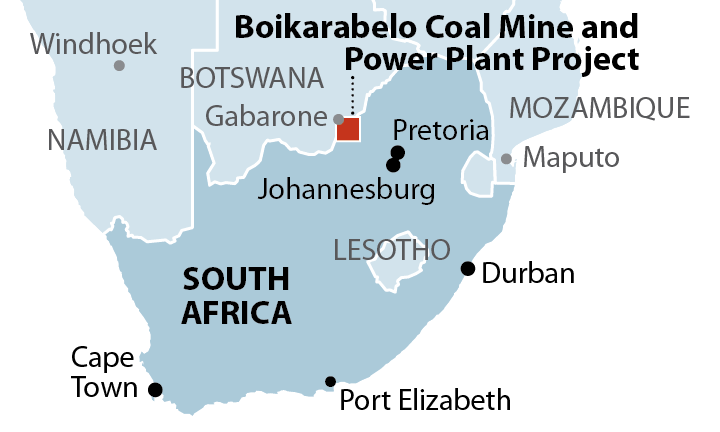 Resource Generation Ltd’s proposed but long delayed Boikarabelo coal mine in South Africa’s Waterberg Coalfield has hit trouble after a key member of its funding consortium pulled out.

The Industrial Development Corporation of South Africa (IDC) has cancelled all previously approved facilities due to its view that “the market conditions under which the Boikarabelo Coal Project would operate have deteriorated materially”, according to a Resource Generation release to the Johannesburg and Australian Stock Exchanges.

The proposed coal mine is intended to supply domestic and overseas markets. Resource Generation is now seeking an “urgent meeting” with its working capital lender.

The material deterioration of the South African coal market has only accelerated in the last five weeks.

This started with China’s surprise announcement that it was targeting net zero emissions before 2060 – a hugely significant statement from the world’s largest thermal coal importer.

Following this, the International Energy Agency (IEA) released the 2020 edition of its influential World Energy Outlook. This annual report is often held up by the coal industry as evidence of a growing future for coal. The coal industry’s response this year has been more muted as the report highlights that overall coal demand peaked back in 2018 and that the IEA expects it will never rise above pre-COVID-19 levels again under its base scenario. Under its 2050 net zero emissions scenario, coal demand collapses globally by 2030.

THIS IS A MAJOR CHANGE IN STANCE FROM THE IEA who in 2019 didn’t see global coal demand peaking until sometime between 2025 and 2030 in its base scenario.

South Korea’s move follows its state-owned power generator KEPCO’s announcement that it will end construction of coal power plants overseas and that the proposed Thabametsi coal power plant will either be cancelled or converted to an LNG project (the former seems more likely).

Meanwhile Eskom is attempting to line up green finance to relieve its huge debt issues in exchange for a staged coal-fired power phaseout.

With the long term domestic market for South African coal looking poor, there is only bad news on the coal export front.

India – by far South Africa’s largest coal export destination – is stepping up efforts to reduce reliance on thermal coal imports in the wake of COVID-19 to protect domestic jobs and improve energy security.

Pakistan is moving away from imported coal to focus on domestic coal, renewables and hydro for the core of its power generation system. Coal power plants using imported coal will be operating at just 14% utilisation by 2030 according to the nation’s new long term power plan. Pakistan is South Africa’s second-largest coal export destination.

There is rapidly declining hope for further opportunity in other markets

Outside of South Africa’s three biggest export destinations, there is rapidly declining hope for further opportunity in other markets.

Bangladesh is planning to cancel 13,000 megawatts (MW) of proposed coal plants – its entire pre-construction project pipeline. The Philippines has just announced it will not build any more coal power plants. And Vietnam is set to cancel or postpone up to 17,000MW of coal power proposals.

INCREASED EXPORTS TO VIETNAM HAVE HELPED PROP UP OVERALL SOUTH AFRICAN EXPORTS IN 2020. However, Richards Bay exports over January to September were still down 1.3% on the prior year following export tonnage declines both 2019 and 2018.

Furthermore, South Africa won’t have any increase in short term Vietnamese demand to itself. Indonesia is targeting Vietnam, Pakistan and Bangladesh as concern builds that it is about to start losing its biggest markets of China and India.

Exporters in South Africa, Indonesia, Australia and Russia will increasingly be eating into each other’s markets as the Asian seaborne thermal coal pool dries up.

A controversial move to fast-track mining, water and environmental licences is part of the South African government’s rescue plan for post-COVID economic recovery. However, coal mining is unlikely to be part of the long term solution to the nation’s unemployment woes.

In fact, as the decline of coal accelerates even faster, the focus will instead need to be on transitioning existing coal mining jobs to new industries with a brighter future.