The Statistics Speak: U.S. Coal Rebound, if It Happens, Will Most Likely Be Muted

The most recent monthly electricity-sector compilation from the Energy Information Administration shows coal-fired generation accounting for just 23.7 percent of generation in the U.S., which means that number averaged 29 percent of the first quarter. Last year coal held 33 decade of the market,a decade ago 48.5 percent.

In March (see the post above) natural gas, solar, wind, hydroelectric and nuclear power all posted gains. While this March was a warm month and while March is generally a slower month for coal, the numbers were still a surprise.

Last year, the U.S. consumed 740 million tons of coal for electricity purposes. Platts coal-consumption data year over year through May shows that figure down 8 percent this year. If you annualize that number, coal use for electricity this year will drop into the high-600-million-ton range.

In the meantime, coal stockpiles remain high. This allows for production levels to drop below consumption levels, and in theory the market should tighten, driving prices up. There is some indication that markets are expecting some coal price improvement in 2017 but, as we have pointed out in previous blogs, higher prices may only lead to further market decline.

Coal consumers have alternatives to coal. This week natural gas prices fell below $2mmbtu. A modest rebound in prices is expected through the fourth quarter 2016, and longer term the futures price for gas is expected to hover in the high $2mmbtu range. 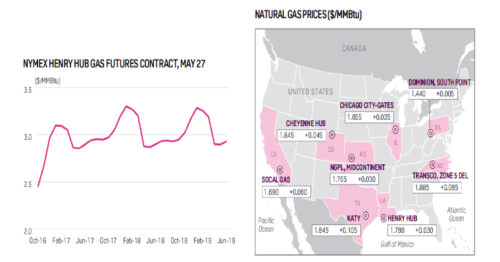 Coal prices are at anemic levels across the U.S. While Platts reports modest gains in all regions through 2017, the more pronounced gains—in Central Appalachia—are unlikely to create broad-based profitability. Most mines will remain in the red. The Illinois Basin price recovery is expected to be the weakest, followed closely by the Uinta Basin.

The 2017 outlook by Platts is for Powder River Basin 8800 spot prices to go up from its current $8.75 per ton to $9.90 per ton. This might make some mines marginally profitable but is unlikely to stimulate much producer participation in the spot markets. Producers will continue to rely on a diminishing portfolio of longer-term contracts at higher prices as existing capacity factors decline and more plants retire. There is some life expected in the PRB 8400 spot market—rising from around $6.90 per ton to as high as $8.20 per ton. We do not expect this price increase to cover the cost of production, however, and would expect further cutbacks in PRB 8400 mines.

The Newcastle coal price has gone up into the $54.00 range but the futures outlook is, at best, flat for the next seven years. This year’s export market could be around 60 million tons out of the U.S.

The decline in U.S. electricity-generation coal consumption is proceeding. Coal producers, making cutbacks, are trying to establish a rebalanced market. But competition from natural gas, renewables and other sources make the task much harder than it would otherwise be. The current business model used by most coal companies does not portend the re-emergence of a healthy coal industry anytime soon.

Peabody’s Bankruptcy Will Shed Light Where Transparency Has Been Lacking