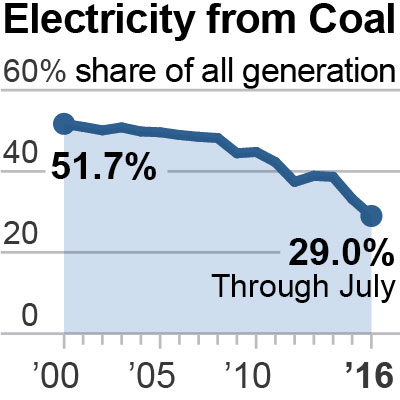 Why has U.S. coal production declined so enormously in recent years?

Because the coal-fired power industry is producing less of the country’s electricity than ever.

As recently as 10 years ago, coal-fired power plants provided half of U.S. power needs. Today that number is closer to 30 percent—and falling. Coal is not likely to fade entirely from the scene any time soon, but its share of the U.S. energy mix stands to drop to less than 20 percent in the not very distant future. 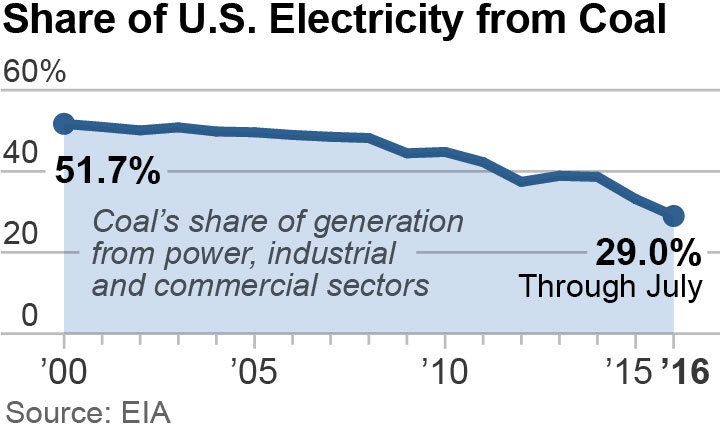 This is largely a market phenomenon driven by cheap natural gas and by low-cost renewables, which, because they are so inexpensive, have become go-to fuels for power generation. Coal does not have a regulation problem, as the industry claims. Instead, it has a growing market problem, as other technologies are increasingly able to produce electricity at lower cost. And that trend is unlikely to end.

True, there has been a recent uptick in coal prices. But there is no evidence that this represents a lasting long-term trend. The fundamentals behind the coal industry’s decline haven’t changed. Natural gas is still cheap. Renewables—wind in particular and now the fast-emerging solar industry—are taking business away from coal-fired generation.

Indeed, a perfect storm of market, technological and regulatory developments are undermining the financial viability of many coal-fired generators across the country. (See our recent reports on plants in Alabama, Florida, Kentucky, Montana, Ohio, Pennsylvania, Texas and West Virginia.)

Cheap natural gas and low energy prices in general are likely to persist. Wind-driven electricity will take a larger chunk out of the coal-fired industry, as will solar. Peak demand has been relatively flat, in part because of gains in energy efficiency, and that boils down to more competition for the same amount of the pie.

Solar and wind installation costs have been declining dramatically in recent years. For example, wind prices have declined to under $30 per megawatt-hour recently from more than $60 in 2009. Because they have no fuel costs—the sun and the wind are free—grid operators now dispatch utility-scale solar and wind facilities ahead of coal-fired power. Solar generation acts to keep energy market prices low during periods of peak demands. Wind generation puts pressure on market prices in both peak and off-peak hours.

Data snapshots drive home the growing impact of renewables. Wind provided 32 percent of the electricity produced from this past October through April in the northern Midwest. Just over 48 percent of the load on the ERCOT grid, which covers most of Texas, came from wind on March 23—a remarkable single-day milestone that will inevitably be eclipsed. In a recent outlook update, ERCOT suggested that the Texas grid could have between 14 and 27 gigawatts of solar power by 2031.

Recent data from by S&P Global Market Intelligence shows a 26 percent decline in U.S. coal production in the first six months of this year. This is not a fluke. It is reflection of a bigger trend, and no short-term jump in coal prices will spell a comeback from the industry’s long-term decline.