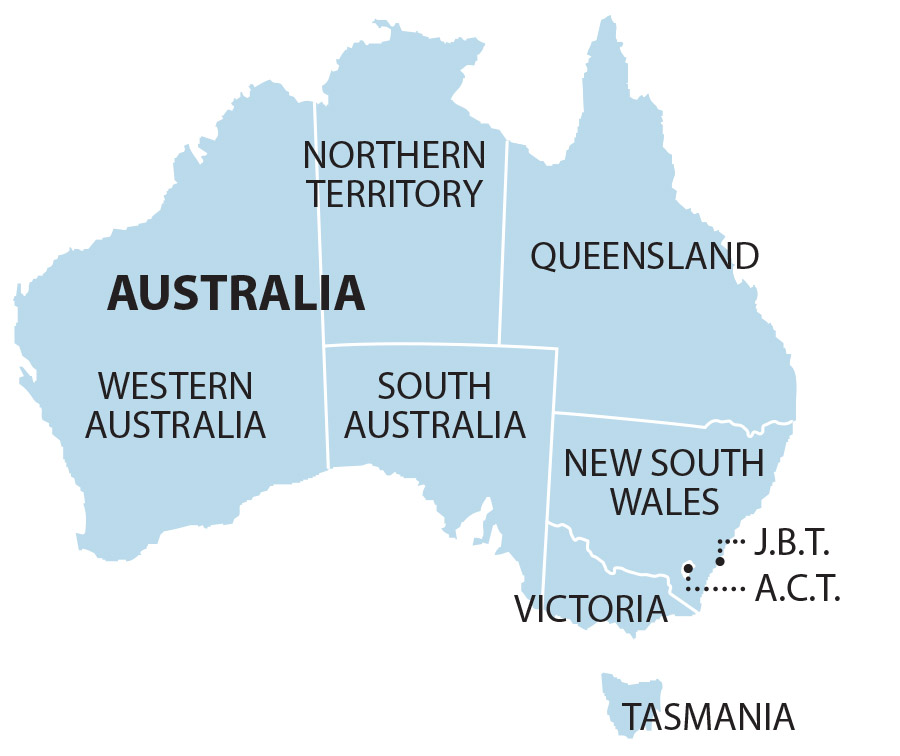 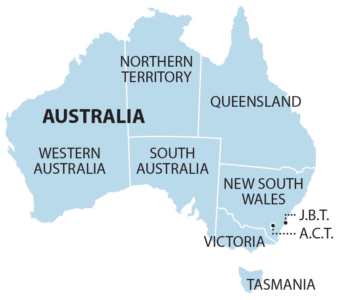 The Australian state of South Australia (SA) has been a remarkable world leader in transitioning its electricity sector to a low-cost, low-emission, renewable energy-driven system in a short space of time.

Three years ago, the state was vulnerable to frequent power outages. Today, SA boasts one of the highest renewable energy penetrations in the world, despite being located at the ‘end’ of a national grid which severely limits its ability to leverage interstate electricity flows.

The state produced 54.6% of its total power generation from variable renewable sources during 2019. Onshore wind and solar (both utility-scale and rooftop) represented 49% of total installed electricity capacity, and battery storage another 2%.

SA exemplifies a learning-by-doing model, with ongoing challenges in how best to manage renewable energy’s intermittency, while providing a template for other states and territories around the world grappling with the necessary energy transition away from coal- and gas-fired power into cleaner, low-emitting electricity systems. 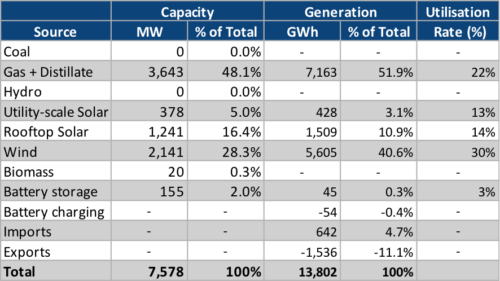 SA has historically been a high-cost electricity market (due to its  location, lack of scale, and the state’s paucity in heavily subsidised coal-fired power). That changed towards the end of 2019 however, with SA achieving the lowest average wholesale price on the NEM, at AU$73.80/MWh in October dropping to AU$56.84/MWh in November.

The lower costs were driven by record high renewable energy penetration (averaging 65-66%) across the state. This resulted in extremely low average variable renewable energy tariffs of AU$43.99/MWh in October and AU$36.06/MWh in November. Indeed, average wholesale prices overall, and for renewables, dropped 30-50% in price compared to the same period in 2018. 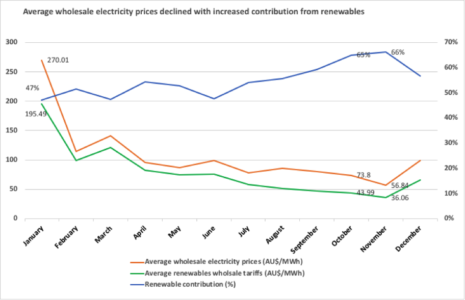 A decade ago, SA was heavily reliant on coal and gas, plus net imports from the neighbouring state of Victoria. A failing coal utility changed that picture. In 2016, the unexpected early retirement of SA’s entire 760 megawatt (MW) of coal-fired capacity, without adequate notice or system planning, forced the state to act.

A decade ago, SA relied heavily on coal and gas, today, it is a net exporter of power

Fast forward to 2019, and SA is now a net exporter of power, with 11.1% of its gross electricity production going  to Victoria, while 54.6% of the state’s power generation is variable renewable energy. South Australia is now targeting ‘100% renewable generation’ this coming decade.

SA also has 1,241MW in behind-the-meter, grid-interactive, distributed rooftop solar capacity, which forms 16.4% of its total generation capacity. This has enabled SA to pioneer the engineering of virtual power plants (VPPs). VPPs are basically the aggregation – through smart controls and communication – of hundreds or thousands of rooftop solar and battery storage installations that can be managed remotely online as though they were a single unit.

An Opportunity for Top Renewable Energy States in India

Karnataka, Tamil Nadu, Gujarat, Maharashtra, Rajasthan and Andhra Pradesh have a combined total of 65.3 gigawatts (GW) of variable renewable energy capacity. In the last three years, these states have built and contracted massive renewable energy generation capacity at less than Rs3.00/kWh (US$41.5/MWh) with zero indexation for 25 years. These tariffs are roughly equal to the average renewable tariff achieved by SA over the last three months. IEEFA notes India’s tariffs are lower in real terms as there is zero inflation indexation for 25 years incorporated into these transformational contracts. 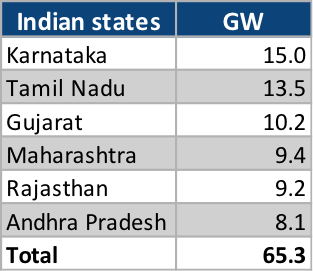 State-owned discoms (power distribution companies) from the top Indian renewable states must have confidence in the deflationary nature of renewables on average wholesale electricity prices, accentuated in SA’s transition. In the last 18 months, some of these discoms have enforced renegotiations and cancellations of already low-priced renewable contracts to further reduce the tariffs discovered through competitive reverse bidding auctions. This has slowed  the pace of investment in new least-cost renewable capacity additions, undermining investor confidence.

Discoms are mandated to underwrite capital costs, even if they do not use the power

On the other hand, these states have increasingly expensive coal-fired power purchase agreements (PPAs) at tariffs 50-60% higher than from renewables on a cost-plus basis, as the discoms are mandated to continue to underwrite capital costs even if they do not take the power. This slow death spiral for power from non-mine mouth coal-fired power plants is compounded by the zero marginal cost of intermittent renewable energy, undermining coal via the progressive decline in utilisation rates along with all the associated increases in inefficiencies, higher auxiliary power self-consumption, and increased wear and tear of faster ramping rates, something coal plants are not built for.

Discoms are trying to offset the unsustainable and largely unfunded electricity cross-subsidies in India (high commercial and industry tariffs are insufficient to offset below-cost residential and agricultural tariffs) by putting pressure on already cheaper renewables. The example from SA suggests that as penetration of cheaper renewable energy increases on the grid, average wholesale prices progressively decline, but this must be accompanied by investment in grid modernisation  to mitigate increased intermittency of generation.

The lesson from South Australia is that if variable renewable energy is to become the dominant source of low-cost domestic electricity in India, much more needs to be done to manage variable demand and to increase variable supply. Greater penetration of lower cost but variable renewable energy requires a significant step-up in investment in reliability via batteries, pumped hydro storage, solar thermal, gas and/or diesel power ‘peakers’, faster-ramping coal plants, plus increased interstate grid connectivity and demand response management.

Flexible ‘time-of-day’ pricing mechanisms are key to enable investments in the reliability of the electricity system.

While battery storage costs have declined dramatically all over the world and will continue to do so, they are yet unviable for the Indian market in the absence of a formal/bankable price premium for on-demand peak power supply. IEEFA sees  a flexible ‘time-of-day’ pricing mechanism as a key policy support required to enable investment in the reliability of components in the electricity system. However, ever-cheaper renewable energy (particularly in real terms) will compensate for increases in complementary and supporting system costs over the long term.

India’s states must stay on track and build renewable energy capacity without burdening already loss-making discoms. At the same time, the Indian government must ensure a policy environment that enables concurrent investment into flexible, firming capacity. It took an extreme weather-induced blackout in SA in 2016 to highlight the need for adequate long-term planning and a pricing incentive for flexible, firming capacity plus increased interstate grid connectivity investment. The SA government has shown clear leadership in creating the policy clarity necessary to drive investment in a complex range of complementary solutions, enhancing system reliability and putting the system on a path to sustainably lower costs as a result.

Unlike SA, which is a small, remote market at the end of a long-line grid with just one neighbouring state with which to trade electricity, India’s top six renewable states already have multiple trading partners via a well-functioning and growing interstate grid system, strongly led by the central government’s Green Energy Corridor investment program. This provides an excellent opportunity for leading states to look at increased investment in renewables, not just to meet their own power demand, but also to drive electricity exports to states which do not have great renewable energy potential. This could allow loss-making discoms of ‘renewable-rich’ energy states to earn new revenues and profits, and spare loss-making discoms of ‘renewable-poor’ states from investing in increasingly expensive new thermal generation capacity, providing a partial financial solution to the current dire state of discoms across India.

India already has a well-connected, centralised power grid. However, grid expansion in the ‘renewable-rich’ zones and better interconnectivity between states would better leverage India’s centralised grid and its abundant renewable energy potential, while helping to manage local intermittency via India’s national demand profile.

SA has innovated its way out of an unreliable, high-emission, polluting, and expensive electricity system in a remarkably short time. A favourable policy and political environment has been key to enabling this technology transition.

India must build on SA’s example and continue to accelerate its own electricity sector transition. There will be enormous benefits from maximising the learnings of those states in both India and Australia that are leading the global energy system transformation, including the exchange of knowledge and ideas with other technology leaders such as  Germany and California.

This analysis originally was published on January 13 in The Economic Times: India’s top renewables states can learn from South Australia

Kashish Shah is an energy finance analyst with IEEFA India.

IEEFA update: India gets out of coal and into renewables