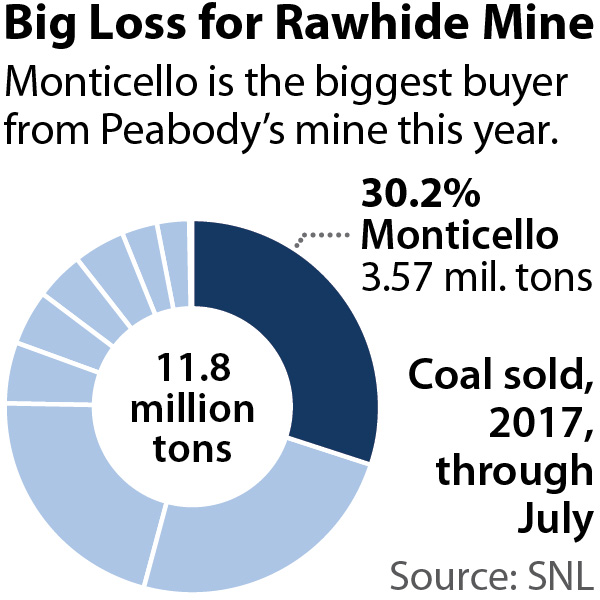 Luminant’s announcement that it will soon retire the Monticello Plant in Titus County, Texas, improves its bottom line by eliminating a liability from the company’s balance sheet. For Peabody Energy, which supplies that plant with Powder River Basin coal, the shutdown is not such good news. 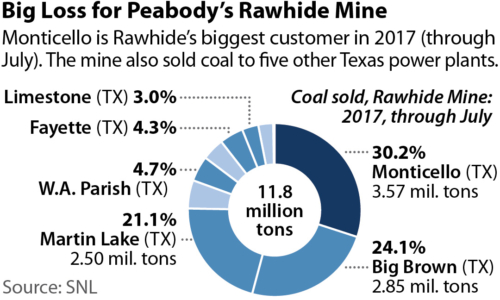 Peabody’s most recent disclosures to investors make clear that it expects a modest decline in U.S. coal production over time. The company also acknowledges that 10 gigawatts of U.S. coal plant capacity will be lost every year for the foreseeable future. And Peabody concedes it anticipates no new capital investment in new mines in the U.S. for a decade.

These market notes are presented by the company even as it applauds for federal repeal of stream-protection rules as they apply to the coal industry, reversal of the EPA’s Clean Power Plan, a rescinding of a coal-lease moratorium on BLM lands and coal-royalty rule reform, and efforts by the Energy Department to subsidize the coal sector.

Even with so many obstacles to the industry being removed, Peabody still sees more coal plants retiring and less coal being mined, a remarkable admission in a such a regulatory-friendly moment.

EARLIER THIS YEAR, PEABODY TOLD ITS INVESTORS AND THE BANKRUPTCY COURT overseeing its recent Chapter 11 proceedings that all of its mines would be cash-positive going forward for five years at least.

We wonder if the Monticello retirement doesn’t change this picture.

Peabody’s most recent quarterly earnings report shows a decrease in Peabody’s Powder River Basin margins through June 30, 2017, of 9% compared to last year at this time (per-ton revenue was down 7 percent). The price of Powder River Basin coal is dropping faster than the company can reduce costs. (Peabody margins in Australia increased through the same period).

Luminant has improved its balance sheet simply by getting rid of a liability. Peabody would benefit from doing the same.

Rawhide produces lower BTU-value coal; its 8400 product fetches substantially less than the 8800 coal that comes out of Peabody’s North Antelope property, for instance. The company does not disaggregate its revenues by mine in its financial presentation, choosing to treat all of its Powder River Basin holdings collectively and reporting coal price on a per-ton regional average (the company does allow that the cost profile of its Powder River Basin operations can vary internally by up to $6 per ton).

We see further margin pressures on 8400 Btu mines like Rawhide despite the company’s cost-cutting efforts in the region. With an average cost of production in the Powder River Basin of $9.80 per ton and spot markets in the middle $8-per-ton range, the company having to absorb prices-per-ton declines as older, higher-priced contracts roll off.

PEABODY’S BANKRUPTCY FILINGS PROJECT AN INCREASE IN POWER RIVER BASIN PRODUCTION by the company in 2018 of 14 million tons. With the loss of Monticello, perhaps 7 million tons annually, it will need to increase coal production by 21 million to meet its stated 14-million-ton projection.

The Energy Information Administration most recent short-term outlook for U.S. coal has the entire western region of the U.S. increasing production by 25 million tons. Peabody would need to somehow capture 84 of that growth if it is to meet its projection. To do so would assume that competitors

for some reason go flat or negative on production.

Peabody’s has a history of overestimating production, prices and future profits—a history that  fueled its debt binge and ultimately led to bankruptcy. Recent price reductions tell us that the market remains fundamentally oversupplied. The odds against seeing any new mine investment for the next decade pounds that point home.

That leaves a mine closing by Peabody in its Powder River Basin portfolio seem overdue.

Luminant has improved its balance sheet simply by getting rid of a liability. Peabody would benefit from doing the same.