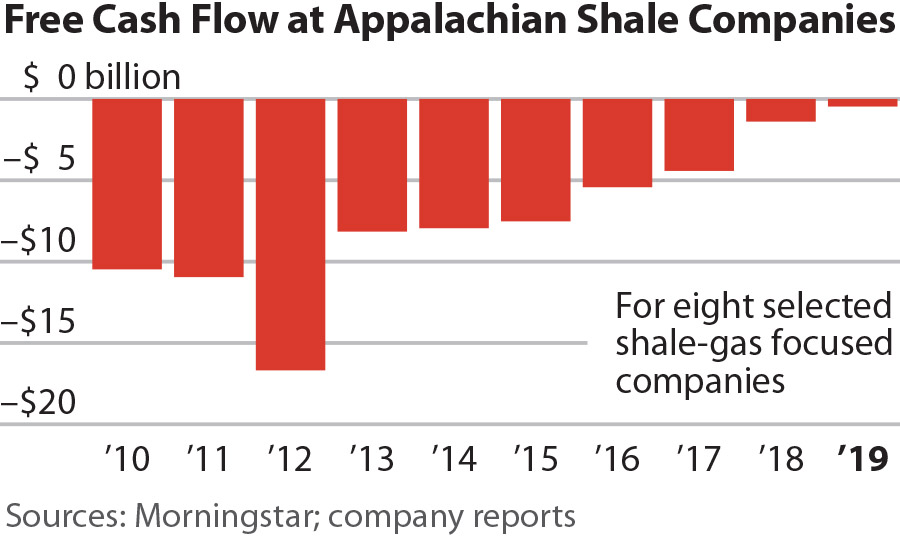 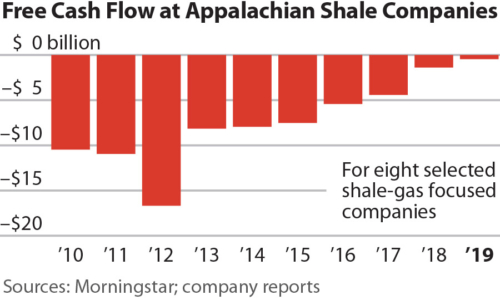 Fracking (Exploration & Production) companies in Appalachia have failed to produce positive free cash flow each year for the past decade, according to an IEEFA analysis released today.

In a briefing note (In Extremis: Crisis Mounts for Appalachian Shale Producers), IEEFA analysts found that eight of Appalachia’s largest producers collectively spent $73.4 billion more on drilling and other capital expenses than they realized by selling natural gas during the decade.

“The fracking sector as a whole has been struggling mightily throughout the decade to register positive free cash flow but for those based in Appalachia, the numbers have been even more dismal,” said IEEFA financial analyst and briefing note co-author Kathy Hipple.

Negative cash flows for the full year, at $466 million, actually represented the decade’s best performance for these companies. Yet only two of the eight firms in the IEEFA sample, Cabot Oil and Gas and EQT, were cash flow positive for the year. Five of the eight companies—Antero Resources, CNX, Chesapeake, Gulfport, and Range Resources—reported negative cash each year throughout the decade. Southwestern’s cash flow was negative in nine of the 10 years, including 2019.

“The paradox for the fracking sector is that the oil and gas production bonanza has been a cash flow bust,” said IEEFA energy finance analyst Clark Williams-Derry. “Q4 2019 was no exception.”

For a brief period in March 2020, some Appalachian-focused gas producers saw their stock prices improve, even as stocks for other oil and gas companies plummeted. This bounce was propelled by an emerging narrative that lower oil prices would curtail drilling in the Permian, translating into reduced gas production from the U.S.’s most prolific shale basin. This comparative improvement in some Appalachian producers’ stock performance lost steam by late March, as natural gas prices continued to decline along with the price of oil, hitting $1.60/MMBtu.

“We expect gas prices to remain depressed for the foreseeable future and add to that decreased demand from the coronavirus pandemic and that spells continuing distress for producers in Appalachia,” said IEEFA’s director of finance Tom Sanzillo.