IEEFA Update: Cracks in the War on Wind

Bloomberg New Energy Finance has the chart of the week in its depiction of the rapid evolution of wind turbines.

Reproduced here, it reminds you a little bit of an old textbook evolution-of-man chart (Lucy to Piltdown to Neanderthal to Cromagnum). Progress in wind-turbine technology is happening a lot faster, obviously, than anything remotely biological, and is moving even quicker than its fiercest proponents might’ve suggested as recently as a year or two ago. 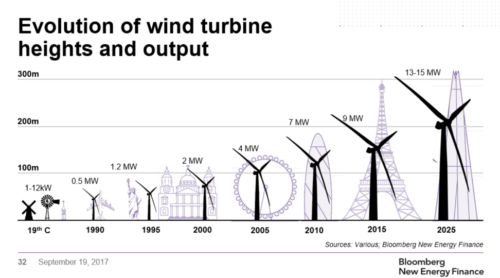 IEEFA’s Gerard Wynn put up a note last week about how news that the most recent U.K. auction on offshore wind generation (“IEEFA Europe: Technology Gains Help Drive a Rush From Capital Markets Into Offshore Wind”) “signals the arrival of a mature, bankable new segment of the energy sector.”

This is one of many recent setbacks in the war on wind, which is being waged by status-quo defenders who continue to resist a gathering momentum toward change across electricity-generation markets.

Back to the Bloomberg New Energy Finance chart for a minute, which was put forth at a London energy conference last week by BNEF Founder Michael Liebreich and distilled into a news article with the core takeaways to keep in mind.

TWO ‘TIPPING POINTS’ ARE APPROACHING, Leibreich said, one in which new energy-generation from renewables will be—and already is, in many places—cheaper than new coal-fired generation. The second “a little further off” but still rising fast, will occur when it is broadly more expensive to run an existing coal-fired plant than it is to generate electricity from wind and solar farms.

The New York Times, in an editorial this past Monday that cited research by IEEFA’s Seth Feaster, Tom Sanzillo, and David Schlissel on trends in U.S .coal-fired electricity generation, sounded a related note of informed skepticism on the Trump EPA’s efforts to revive the coal industry through policy tweaks. Hot air, the editorial observed, is not necessarily a market force.

“It is shocking that an administration led and staffed by supposedly shrewd business executives deliberately overlooks the blossoming of profitable and cleaner energy products simply because of Mr. Trump’s hollow showmanship before his campaign base.”

Coal-fired electricity isn’t the only “conventional” form of generation facing an existential crisis.

“Renewables Trouncing Nuclear” is the headline on a PV Magazine article about a new study documenting that trend.

The operative passage: “Global nuclear power generation increased by 1.4%, whereas solar power output grew by 30% and wind by 16% in 2016, with all renewables representing 62% of global power generating capacity additions, finds the 2017 World Nuclear Industry Status Report.”

A COUPLE OF ADDITIONAL NEWS ITEMS OF NOTE THIS WEEK include an article by the energy-industry trade publication SNL on a speech by the CEO of the company that runs Ireland’s electricity grid. The CEO, Fintan Slye, cited lagging “mindset and the culture and the approach in a lot of the incumbent companies.

“We’re at a point where just because something worked for the last 50 years doesn’t mean that it’s the approach and the thing for the next 10.”

Why Denver-based Tri-State Generation and Transmission Association now says it will bag a plan to build the 896-megawatt coal-fired Holcomb Expansion in Kansas—writing off $93 million in losses tied to the untimely project.

And—back to wind again—why Cliff Hite, a Republican member of the Ohio State Senate, is championing a bill to lift a freeze on wind-farm development in the Buckeye State.  Hite is no lone wolf. He has 14 co-sponsors in the 33-member chamber, 2 of whom are in leadership positions.

IEEFA Update: Hurricane Maria Gives Puerto Rico an Opening to Shrug Off the Past and Build a Modern Electricity Grid