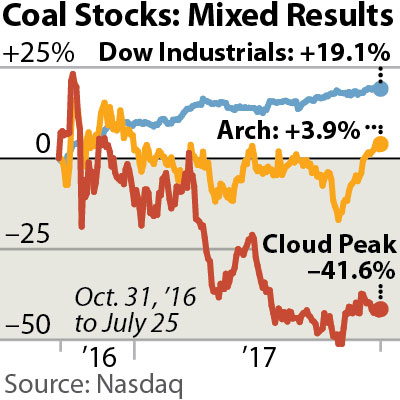 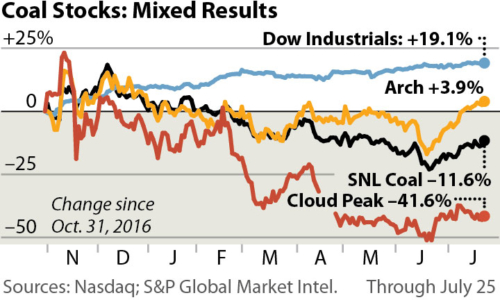 Arch Coal and Cloud Peak Energy will report earnings tomorrow, the first out of the gate among the major U.S. coal producers. Whatever emerges in the details won’t alter the fundamental problems bedeviling the industry.

A few notes on what we see:

Year-to-date stock prices for both companies are mixed. Arch has been able to keep its head above water vis-à-vis the rest of the coal industry. Cloud Peak continues to struggle as the company grapples with declining demand and a marginal export presence.

Year to date, the coal industry continues to lag the Dow Jones industrial Average. The SNL Coal Index is down 12 percent since November while the Dow is up 19 percent. This tendency by the industry to lag the major stock indexes is going strong now into its sixth year even with the slight uptick reported in late 2016.

One analyst commenting recently on the short-term possibilities for the industry suggested it might make sense for coal producers to keep it in the ground. The overcapacity picture isn’t likely to change much in the earnings reports that are emerging. Too many companies are still producing too much coal for a declining base of consumers.

We remain wedded to the proposition that there will be more consolidation across the U.S. coal industry and most probably more bankruptcies.

The problem for the coal industry is that money makes this all happen and right now it is hard to see the combination or combinations that make a significant investable proposition that can help really provide a lift. We are more likely to continue to see smaller deals, many counterproductive attempts to add more capacity to an oversupplied market.