IEEFA: Solar recharging of electric vehicles is a far more efficient use of land than ethanol crops for blended fuel in India 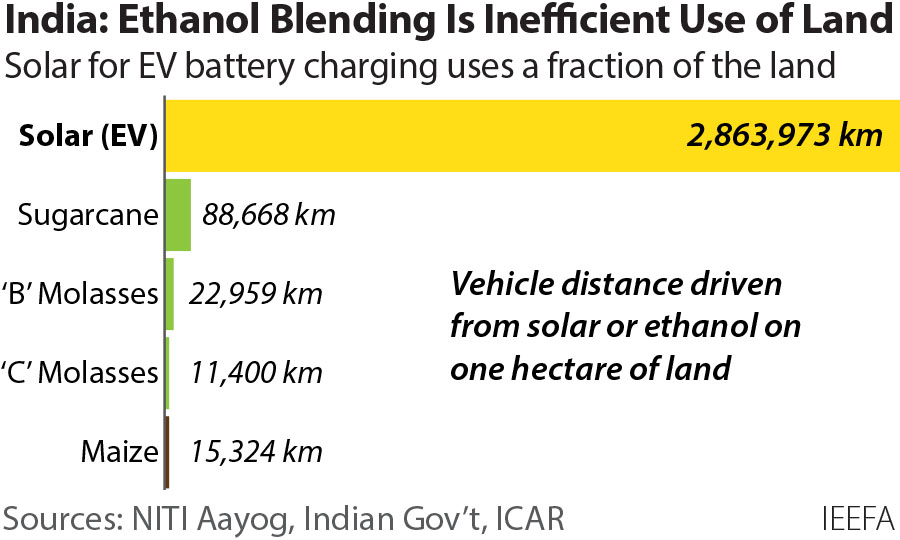 23 March (IEEFA): India’s 2025 target for 20% ethanol blending in petrol requires large increases in ethanol from sugar and grains. A new report by the Institute for Energy Economics and Financial Analysis (IEEFA) shows that generating solar energy to recharge electric vehicle (EV) batteries would be a far more efficient use of land than growing crops for ethanol.

The report shows that matching the distance driven by EVs recharged from one hectare of solar generation would require ethanol derived from up to 251 hectares of sugar cane or 187 hectares of maize – even accounting for losses from electricity transmission, battery charging and grid storage.

Enhancing goals for EV uptake could meet many of the goals set out in India’s Roadmap for Ethanol Blending – cutting emissions and air pollution, supporting domestic agricultural demand, and reducing the drain on India’s foreign exchange by limiting oil imports – while using a fraction of the land, according to the report. While surpluses may be sufficient for the component of new ethanol earmarked for sugar, up to 30,000 sq km of land may be needed for the additional ethanol planned for grains (maize).

“While the government’s promotion of ethanol blending in petrol may seem like a way to ease the burden of soaring crude oil prices, it further increases the pressure on agricultural land just as the war in Ukraine threatens the world’s grain supply. This intensifies the competition between energy and food and raises the stakes for wise land use in India significantly.

“Although Russia has an 11% share of global oil exports, 26% of wheat exports come from Russia and Ukraine, and 16% of corn exports. In the end, food trumps energy for claims on arable land if the food supply comes under pressure.”

Future threats to agricultural production in South Asia have been reinforced by the recent IPCC Working Group II report, underlining the critical importance of wise land use in India.

“A re-evaluation of the ethanol-blending policy and alternatives is needed urgently, given that its targets have been brought forward to 2025 from 2030,” says Worringham.

The report builds on IEEFA’s recent examination of the interplay between the energy transition and land use in India, and of India’s potential in agrivoltaics, comparing the land required to meet the ethanol-blending target with land needed for solar generation.