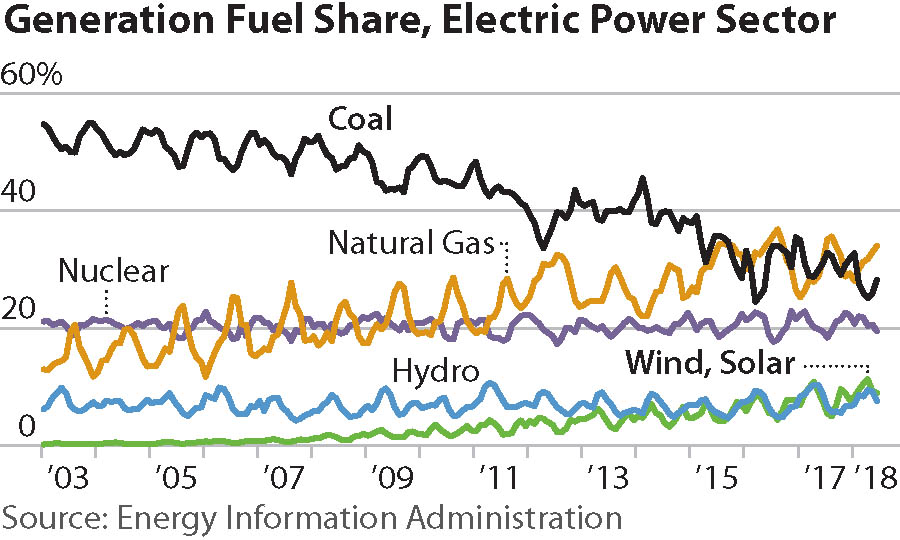 We’ve published a research brief today that looks at the underlying forces driving a global shift in how electricity is generated.

Our paper—“The Seven Technology Disruptions Driving the Global Energy Transition”—is a primer on fundamental changes occurring now that are collectively displacing coal from its long-dominant role in power generation.

We note in the brief that coal is being rapidly replaced by natural gas, wind and solar as a worldwide push for electricity modernization intensifies. 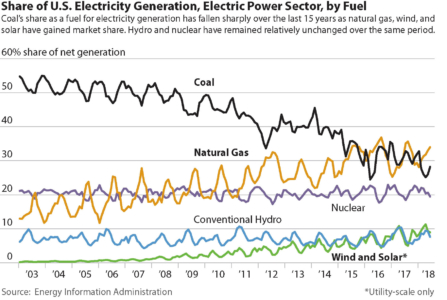 Meanwhile, economic growth in many nations is no longer tied to increases in the consumption of fuel, as energy efficiency has grown and as the sectors leading economic expansions are less energy intensive than the heavy industries of the past.

And the “electrification of everything,” by which electricity—rather than other forms of energy—is powering more and more aspects of commercial, industrial, and consumer life is a trend that is most obvious in transportation, where the impact of electric vehicles is still small but is on course to completely transform the sector in the years ahead.

We break our seven core disruptions into four that are being propelled by generation-side activity and four that are grid-based.  The report focuses mainly on how these changes are being felt in the U.S. 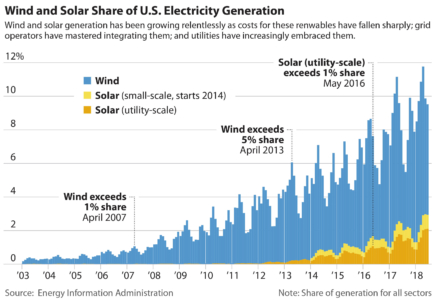 We note also that the above seven disruptions carry serious implications for the coal industry, which faces an increasingly bleak outlook as the electricity sector modernizes.

Taken together, these disruptions signal a permanent structural decline for coal in the U.S.

They indicate a future in which no new coal plants will be built the U.S., and retirements among the existing and aging coal power fleet will continue unabated. A restructuring of the coal mining industry is inevitable in the face of a shrinking customer base, massive overcapacity, and intense competition.

This reality simplifies utilities’ economic decisions around closing coal plants—if a plant cannot turn a profit using coal, it only makes sense to shut it down and switch to a cheaper form of power production. On the other side, though, coal companies have little recourse beyond turning to a limited and fickle export market, because domestic use of coal for industrial, commercial, and residential purposes is disappearing.

More bad news for coal is rooted in the way utilities have already cut their coal-fired generation capacity. Most coal-fired units retired in recent years were among the smallest and oldest in operation. But because the energy transition is happening so fast, as costs for renewables and natural gas keep falling, some of the biggest plants have now become uncompetitive, and larger closures will almost certainly be more disruptive to the coal industry.

Seth Feaster is an IEEFA data analyst.  He can be reached at sfeaster@ieefa.org.

IEEFA report: Benefits to Engie from closing three German coal-fired power plants would outweigh any gains from selling them