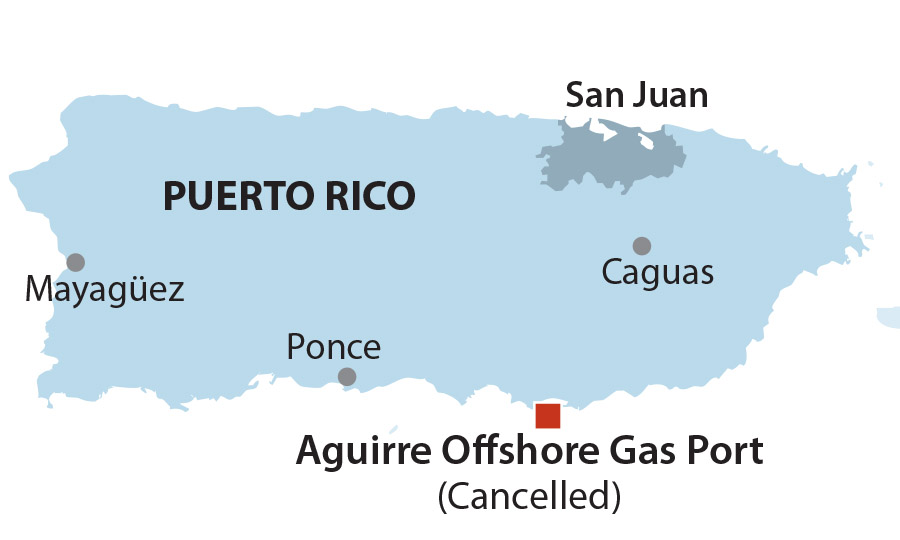 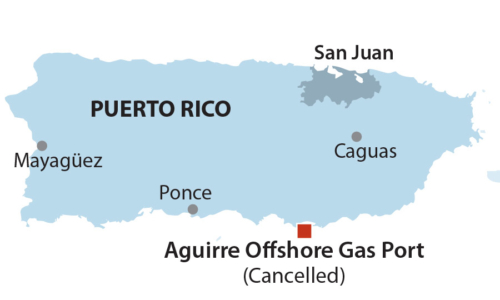 A massive liquefied natural gas (LNG) project in Puerto Rico that would have diverted funds from badly needed development of solar power and would have kept electric power costs high has been officially cancelled.

Last week, Excelerate Energy, the company that planned to develop a natural gas import terminal in Puerto Rico, requested that the Federal Energy Regulatory withdraw its authorization for the project.  Its brief filing with the agency stated:

“As a result of changed circumstances, the Aguirre Offshore GasPort project, including the liquefied natural gas (“LNG”) terminal conditionally authorized in the Authorization Order, has been cancelled.”

The Aguirre Offshore GasPort (AOGP), which would have brought natural gas to the Aguirre power plant complex located on the southeast coast of Puerto Rico, would have required a capital investment of more than $400 million, plus annual operational costs of $77 million.

THE WITHDRAWAL OF THIS ILL-ADVISED PROJECT IS WELCOME NEWS FOR THE FUTURE OF PUERTO RICO’S ELECTRICITY SYSTEM. Many organizations on the island, including Comite Dialogo Ambiental, IDEBAJO, El Puente and others, as well as the Institute for Energy Economics and Financial Analysis (IEEFA), had opposed the project.  If built, the gas port would have made the island more dependent on natural gas and required a large upfront capital investment at a time when the island should be investing in renewable energy.

The project had never received regulatory approval from the Puerto Rico Energy Bureau (formerly Commission). In evaluating the Puerto Rico Electric Power Authority’s (PREPA) long-term integrated resource plan in 2016, the Bureau found that PREPA had not provided sufficient economic justification for the project. The Bureau also noted that, if PREPA were to prioritize the development of renewable energy and energy efficiency, the value of AOGP would be “short-lived” as renewable energy would grow and displace the use of fossil fuels in the electrical system.

One bad idea is off the drawing board.

PREPA’s economic case for AOGP depended heavily on highly uncertain assumptions about future natural gas prices, about future growth of renewable energy, and about how the project would be financed. PREPA was never able to present a clear plan to the Bureau for financing the project.

THESE COSTS ALTOGETHER MEAN THAT THE COST OF NATURAL GAS IN PUERTO RICO IS ALMOST THREE TIMES HIGHER THAN THE COST ON THE U.S. MAINLAND (closer to $10/million British Thermal Units (MMBTU) in Puerto Rico, as opposed to $3-$4/MMBTU on the mainland).  And this does not include the cost of constructing new port or pipeline infrastructure that would be required to bring natural gas to the island’s oil-fired power plants or the cost of converting those power plants to use natural gas. As recognized by the Energy Bureau, constructing new large-scale infrastructure to be paid off over decades creates the risk of overbuilding fossil fuel infrastructure and crowding out investment in renewable energy.

This analysis is supported by PREPA’s preliminary modeling results for its next integrated resource plan, which is scheduled to be released in January, which indicates that the near-term priority for investment in the electrical system should be solar and battery storage.

First proposed in 2010, the Aguirre Offshore GasPort (AOGP) joins a line of failed natural gas projects in Puerto Rico, including the Via Verde gas pipeline and the South gas pipeline. Nevertheless, Puerto Rico politicians, including PREPA executive director Jose Ortiz, continue to emphasize the importance of natural gas investment as a “transition fuel.”

Yet, despite this rhetoric, Puerto Rico has yet to come up with an economically and financially viable natural gas project, even as renewables continue to decline in price. But with the cancellation of AOGP, at least one bad idea is off the drawing board.