NTPC’s long-term target of about 32 gigawatts (GW) of renewables by 2032 – 24.6% of its total planned capacity of 130GW – makes it a key player driving the electricity sector transition, in line with the Government of India’s ambitious goal of 450GW of renewables and hydro power by 2030.

In August 2019, NTPC announced it planned to set up a 5GW ultra-mega industrial solar park in Kutch, Gujarat, with an investment of Rs20,000 crore (US$2.7 billion).

Then, amidst the gloom of the economic downturn exacerbated by COVID-19, came the positive news that the Gujarat government is starting the land allotment process for a massive 42GW ultra-mega renewable energy park in Kutch. When fully commissioned this will be world’s largest renewable energy facility, twenty times the size of the world’s current largest operational one, Rajasthan’s 2.2GW Bhadla solar park.

Reportedly, NTPC will be allotted 10,000 hectares of land for its planned 5GW ultra-mega solar park in Kutch as part of the larger 42GW of planned capacity by the Gujarat government.

It currently has 2.3GW of renewable energy capacity under construction. When commissioned, this will take NTPC’s renewables portfolio to 3.3GW.

NTPC, along with Solar Energy Corporation of India, has also been playing an important role in facilitating renewable energy tenders by acting as a guarantor between renewable power producers and distribution companies (discoms).

The company also plans to gradually expand into electric vehicle charging infrastructure as the electrification of transport creates a convergence between the power and transportation industries.

The addition of new coal-fired capacity amidst no growth in power demand during FY2019/20 cannibalised performance of NTPC’s own capacity. Based on reported Plant load Factor (PLF) and Plant Availability Factor (PAF), IEEFA estimates that NTPC’s coal plant utilisation factors reduced to 61.2% in FY2019/20 from 66.9% in FY2018/19.

NTPC’s average tariffs increased 15% from Rs3.39/kWh in FY2018/19 to Rs3.90/kWh in 2019/20, whilst renewable energy tariffs in India and globally continue on a consistently downward (deflationary) trajectory.

We estimate the levelised cost of electricity for discoms for this tender to be Rs1.13/kWh (US$15/MWh) if India experiences 5% annual inflation over the 25-year length of the project.

In a move that could potentially reduce its overall fuel costs, NTPC recently invited bids for supply of 6Mtpa biomass pellets made out of stubble and husk to co-fire in its 17 coal-fired power plants across the country.

NTPC plans to have 10% of biomass co-fired with coal. This will materially reduce stubble burning – a major cause of air pollution in northern India while also providing farmers a much needed second source of income. 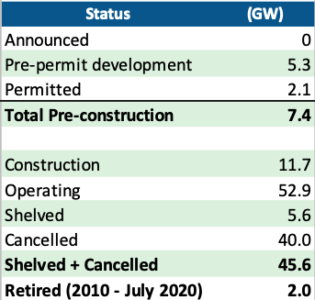 IEEFA believes that NTPC will likely discontinue its 7.4GW of pre-construction capacity. There is also a clear risk of underperformance on its 11.7GW of under-construction power plants – evident in the consistently declining utilisation rates in the five years to FY2019/20 due to the addition of new capacity well ahead of demand growth.

Under continuing pressure from deflationary renewable energy tariffs, India’s coal-fired fleet’s utilisation rates have collapsed to an unsustainable low of below 60% for the last three years.

As a result, the sector has accumulated US$40-60 billion in stranded assets.

Global Finance Moving Away from Coal

Governments, investors and utilities across the globe are rapidly moving away from coal as they realise the need to accelerate the transition to a low-cost, low-emission and sustainably profitable energy economy.

In the last week of September, KB Financial Group became the first South Korean financial entity to renounce coal when it retracted plans to invest in coal-fired power projects. The company has decided instead to direct finances to low-carbon and renewable energy projects.

This followed news from Poland, one of the world’s top coal-producing countries, that the state-owned bank PKO BP had adopted a coal policy in 2020 that rules out financing new coal and lignite mines and coal plants. The policy also commits Poland’s largest bank to a gradual reduction in financial support for existing companies in the coal sector but does not set absolute targets for reductions.

Leadership in the Transition to Clean Energy

Prudent planning and investment for emission-control implementation is another key area in which NTPC is setting an example for India’s other thermal power operators to follow.

Even as renewable energy delivers all the incremental electricity demand growth of India in the coming decade, thermal power will remain a key part of India’s energy mix, increasingly relied upon for peaking power supply. NTPC, with its financial and operational capabilities as well as its political clout, is one of the last entities in India that can still procure sufficient capital access to risk building new coal-fired capacity amidst the ongoing distress and loss of competitiveness in the thermal power sector.

Even so, the company’s focus on more renewables, particularly its intention to build an ultra-mega solar park in Gujarat, will be a major facilitator of India’s electricity sector transition. NTPC’s target of 32GW of renewables by 2032 represents a material component of India’s overall clean energy target, driving both deflation and progressive decarbonisation while working to reduce air pollution and water scarcity pressures, as well as providing a much-needed clean energy investment and job stimulus as India starts to recover from COVID-19.

Kashish Shah is a Research Analyst at IEEFA. 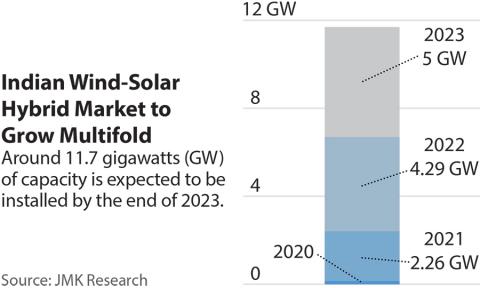 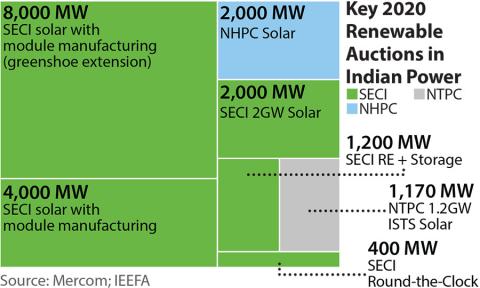 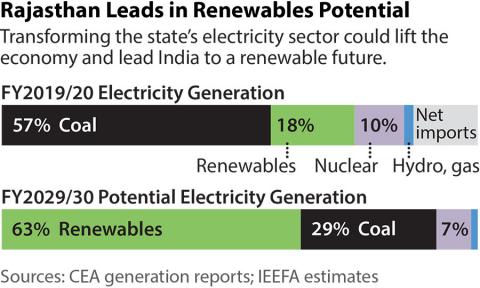