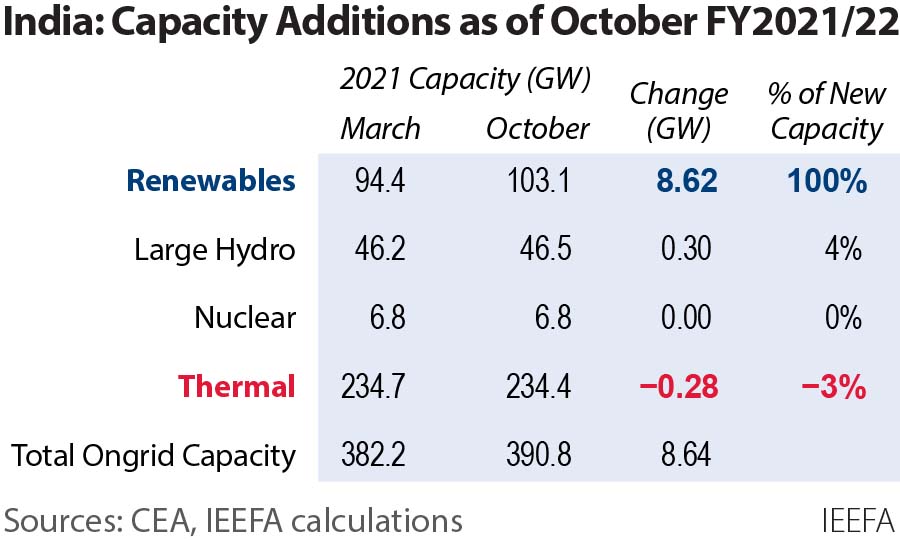 Renewable energy capacity additions in India are poised to hit about 15 gigawatts (GW) this financial year, eclipsing the record high of 14GW achieved in FY2016/17.

As India’s second wave of COVID-19 subsided, renewable capacity commissioning began to bounce back. A total of 8.6GW of renewable energy (RE) capacity – 7.6GW of which was solar – was installed in the first seven months of FY2021/22. This is a substantial increase compared to year-on-year renewable installs of 5.7GW in FY2019/20 and 2.6GW in FY2020/21.

In July 2021, a two-and-a-half-year anti-dumping duty on imported solar cells and modules ended and since then solar developers have been making the most of a “duty-free” window to import modules. That window is due to close in April 2022 when a basic customs duty (BCD) of 40% is imposed.

Meanwhile solar module prices have gone up due to supply chain constraints on the raw materials. India is looking to build significant domestic module manufacturing capacity to reduce exposure to price volatility from imported modules. At this rate of solar commissioning, India’s renewable capacity additions could reach ~15GW.

In thermal capacity, on the other hand, there have been net losses on the grid during the same period, with 2.1GW of coal-fired capacity added versus 2.4GW retired by October 2021. (Unit-1 of Sterlite IPP of 0.6GW in Odisha was taken off the grid and converted to captive capacity in August 2021. We have counted this capacity as retired from the grid.) Investment must ramp up to meet renewable energy targets

India’s climate action pledges received a mixed reaction at COP26. The near-term target for 50% of power capacity from clean energy sources won plaudits, while the lack of a concrete plan to phase out coal power generation capacity left many dissatisfied.

However, India has committed to phase down coal-fired power plants. This is a big commitment from a developing country with huge ambitions for economic growth and social objectives such as energy security and job opportunities.

Given the urgent need to ensure energy security and self-reliance to meet India’s growing electricity demand, the transition to clean energy will be market-driven. In the long term, renewables, as the least-cost source of electricity, will win the race.

To meet the mega target of 500GW, annual capacity installs will have to accelerate to ~35GW

To meet the mega target of 450GW of renewable energy capacity (500GW including large hydro) by 2030, annual capacity installs will have to accelerate to ~35GW. This requires massive investment not only in RE capacity but also in expanding and modernising the transmission and distribution network and important grid firming technologies such as battery and pumped hydro storage.

Sustained capital movement into clean energy capacity will crowd out funding for new coal-fired capacity and lead to the termination of old and expensive coal plants. In the four years to the end of FY2020/21, a total of 9.2GW of coal-fired capacity was retired from the grid – a trend that should continue with an average of 2-3GW of capacity retired in the next couple of years.

The enforcement of emissions control norms is yet another sword hanging over old coal-fired capacity. The National Electricity Plan 2018 identifies 22GW of plants that do not have space to implement emission controls. In addition, incorporating the emissions control equipment would be financially unviable for older plants, which would have to materially hike tariffs to justify such an investment.

The new Market-based Economic Dispatch (MBED) mechanism, which aims to nationally pool India’s generation resources, is set bring in competition by ensuring the least-cost generation sources are dispatched first. This will lead to a natural death for expensive coal-fired power plants and further dim the prospects for new coal-fired capacity.

India’s aggregate power demand, as well as daily peak demand, will continue to grow strongly. Accelerating capacity commissioning of 25-30GW of renewables with viable battery storage prices for grid-firming would allow the government to ramp up coal capacity retirements.

This article first appeared in The Economic Times