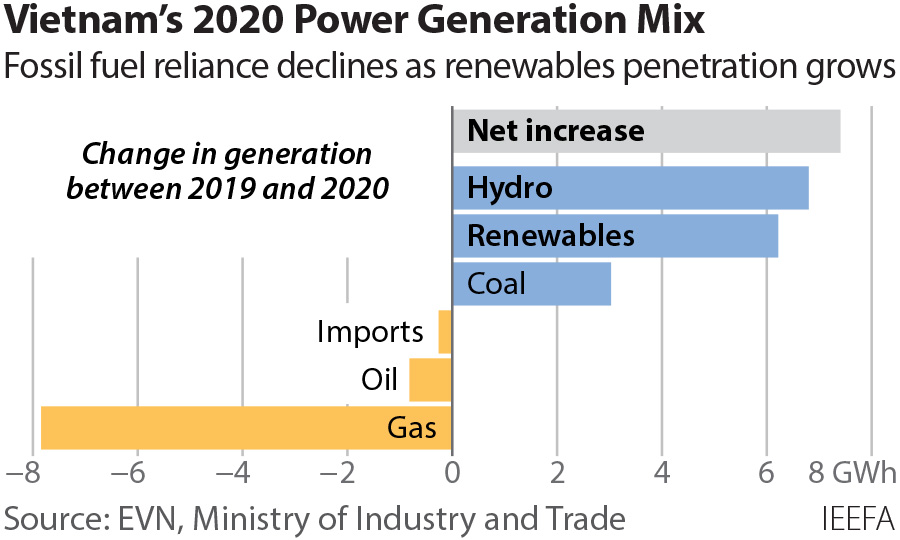 “In a year when most regional power companies can be excused for reporting losses, EVN posted an improvement in its operating margins and gross profit despite the challenges posed by the COVID-19 pandemic,” says report author, IEEFA Energy Finance Analyst, Thu Vu.

In 2020, favorable hydrological conditions in the monsoon season enabled EVN to work with a higher mix of low-cost hydropower which went up 10.2% versus the previous year and accounted for 30% of the generation mix. Increased dispatch of solar power also led to lower utilization of gas power plants (-18.4%) and costly oil-fired power stations (-44.0%). Coal power output rose slightly (+2.5%) and remained the dominant source, responsible for half of the generation mix.

“EVN’s improved financial position is due to a cost-friendly generation mix thanks to the better availability of inexpensive hydropower, rather than a sustained strategic fix,” says Vu.

The COVID-19 pandemic depressed demand across all power markets, but for Vietnam, this deceleration helped spare the economy from the looming threat of power outages and gave EVN breathing room to better manage the operational risks that come with years of high growth.

“This is a positive scenario, and a vivid reminder of the sensitivity of EVN’s financial profile to volatile hydropower sources, but there are no guarantees that EVN will continue to be so fortunate,” says Vu.

The report also highlights EVN’s ability to benefit from a more cost-effective generation mix with more renewable energy, including hydro and solar power, and less fossil-fuel based electricity, has strategic implications for the planning of Vietnam’s power system. “With more variable renewables coming online, the role and dominance of coal and gas-fired power in the country’s energy mix faces inevitable adjustments.

“This shift will require a thorough review of the economic assumptions that have driven commitments to large-scale pipeline projects that cannot be dispatched flexibly.”

Vu notes the one red flag in the 2020 results is that EVN held back on capital spending. This means that much-needed investment in grid infrastructure may continue to be a problem area, particularly for the renewable energy assets now facing curtailment risks.

Total borrowings continued to decline, while financing needs for EVN’s pipeline of large-scale generation projects, many expected to break ground in 2021-2022, could further constrain funding for transmission projects in the near term.

“While official announcements by EVN indicate urgency and a strong focus on upgrading substations, transmission and distribution lines in critical regions, it is difficult to gauge the full scale of the work in progress.”

Apart from financial constraints, pre-investment bureaucracy and complexity around land clearance and compensation have been critical barriers to EVN’s efficient build-out of grid infrastructure projects.

“Delayed grid upgrades pose near and long-term risks to the cost-effective integration of the growing renewables fleet,” says Vu.

Read the report (in English): Vietnam’s EVN Stands Out With a Strong 2020 Financial Performance

Read the press release in Vietnamese