IEEFA Australia: No amount of government subsidies can halt decline of gas 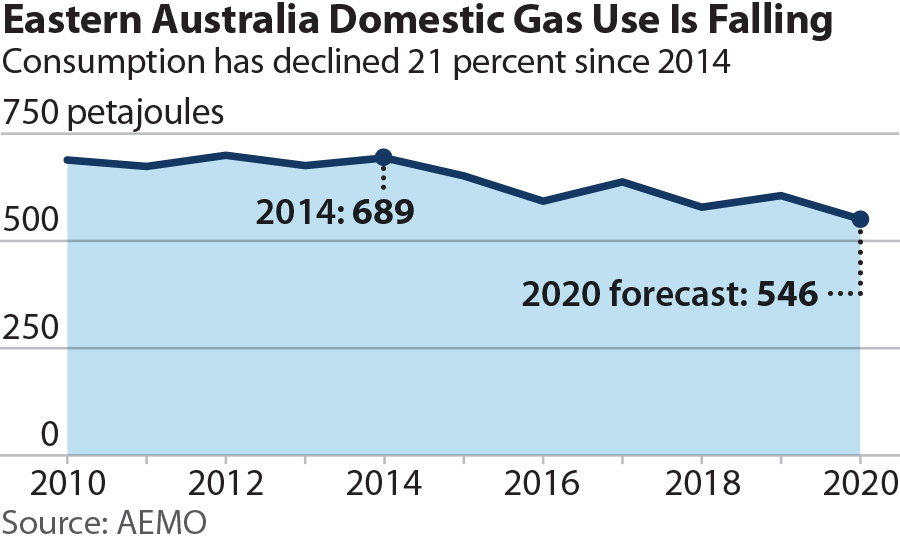 Today, the early closure of Yallourn coal-fired power station in Victoria was announced. The closure is four years earlier than anticipated and points to the rapidly changing  economics of power production in Australia.

EnergyAustralia announced Yallourn will be replaced with a 350 megawatt (MW) ‘giant battery’ to be completed by 2026, with four hours storage. Batteries are replacing coal, not gas.

And yesterday it was discovered the Australian Government had turned to Boston Consulting Group to design a plan to dole out hundreds of millions of dollars in gas-fired recovery money.

These generous subsidies, however distributed, will fall on an industry in decline that will not stimulate the economy.

The rise of cheap renewable energy has seen pressure on wholesale electricity prices.

Future prices for baseload electricity in Victoria plummeted this past year, falling from more than $80 per megawatt-hour in March 2020 to $24 in March 2021.

Whilst Australia drags the chain on net zero climate change commitments and has only sparse plans to reduce emissions, its trading partners are rapidly adopting firm and ambitious goals.

There is a stark and growing realisation that the gas (and pipeline) industry has been under-reporting its emissions with gas in fact being a high greenhouse gas emitting fuel that is worse for the climate than coal in the short term.

It is early days in what exactly this means but it is clear that, over the next decade, gas will have to be phased out of most of its uses.

Gas industry is being squeezed globally

In Europe, a taxonomy has been introduced that effectively means gas plants can no longer be built for power generation. (A taxonomy is a classification system that provides definitions to companies, investors and policy makers on which activities can be considered environmentally sustainable). The European taxonomy may well be adopted globally.

A system of carbon tariffs is also being introduced in the U.S. and Europe.

In the UK, the British utility Drax has scrapped plans to build the country’s largest gas-fired generator in Yorkshire following fierce opposition from climate groups.

There is a renewed vigour on climate change policies by the U.S. that will drive global change. The Democrats have set an ambitious interim goal of 80% clean electricity by 2030 and 100% by 2035.

And China, the world’s fastest growing demand source for gas, is looking to go net zero emissions by 2060.

However, perhaps what is more concrete than political commitments to lowering emissions is the rapid advance of technology.

Essentially, gas is being superseded in two of its key sectors of demand, domestic heating and cooking, and gas-powered electricity generation.

In Australia, it is cheaper to heat your home with a heat pump (electric air conditioner), more efficient to heat water with a heat pump system and your stove with an induction cooktop. The gains in heat pumps’ efficiency are making gas uncompetitive as a domestic fuel source.

Australian gas consumption is down 21% since 2014, driven by the decline of gas powered generation.

Gas is not serving as a transition fuel, rather it is a fuel exiting the energy system

Gas’ demise as a fuel for electricity generation is being hastened by the rise of grid scale batteries. Batteries reached a tipping point some time before September 2020 when their declines in cost suddenly made them competitive as a substitute for gas peaking plants.

Batteries reached a tipping point some time before September 2020

A rash of grid scale battery projects has ensued.

At the time it was built, the Hornsdale Big Battery in South Australia was the largest grid scale battery in the world at 100MW/129 MWh. It has since been expanded to a size of 150MW/193MWh.

Since November 2020 there has been a flood of new battery projects proposed for Australia totalling 3000MW. The largest is CEP Energy’s 1200MW plant in the Hunter Valley, some 12 times the size of the Tesla big battery in South Australia.

Vastly different to the lengthy gas infrastructure development timeline, batteries are fast to deploy. Neon’s 300MW facility announced in November 2020 has already reached financial close and will be operational by the end of 2021.

All of the large, proposed battery projects have land and connection points to the grid making their realisation more likely.

In the short term, big grid scale batteries will not entirely replace gas. They will however take the cream out of the market and crimp gas’ profitability and usage.

With gas on the way out and batteries picking up the load, it is highly unlikely that any gas-fired power plants will be built by the private sector in Australia ever again.

Whilst politics, emission targets, carbon prices and taxes will all play a big part in gas’ decline as a fuel source globally, it is technology that will ultimately decide its fate.

As with all technological disruptions they usually occur faster and are far more brutal than even what their most ardent proponents expect.

Fancy consultants may appear to place the government at arms-length to its gas-fired subsidy scheme.

The markets however are telling Australians that it is wasted money on a declining industry.

This commentary first appeared in RenewEconomy.