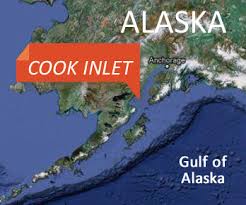 Developers of the proposed Chuitna mine near Alaska’s Cook Inlet are counting on being able to sell the coal for export to Asia. But their timing couldn’t be worse: the seaborne coal market has entered a steep structural decline—not a cyclical one—and established producers, including one from Alaska are scrambling already for whatever market share they can hang onto.

The Chuitna mine would be a greenfield project, that is, breaking ground in an area that hasn’t been developed for mining. It would require extensive infrastructure to overcome challenging terrain. Plans by the developer, Pacific Rim Limited, call for a 5,050-acre open-pit mine that would produce 12 million metric tons of coal per year, or approximately 268 million tons over the life of the mine. 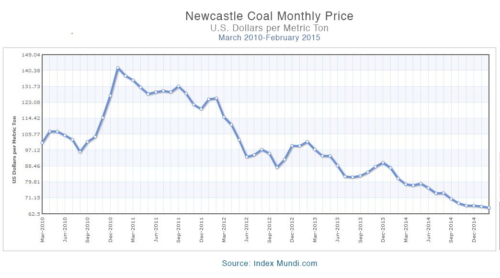 Pacific Rim would have to build a 4.5-mile power transmission line, mine-access roads, housing, an airstrip and a coal-export terminal at Ladd Landing that would rely on a 10,000-foot-long trestle in Cook Inlet. All of this combined would demand a significant outlay that would require the coal to fetch $91.29 per ton, according to a 2011 study by the Center for Sustainable Economy, far higher than current market prices. Right now, coal is selling for under $60.00 per ton.

Market realities aside, the project faces other costly hurdles. The Alaska Department of Natural Resources, the Army Corps of Engineers and other federal and state agencies are in the midst of a lengthy permitting and environmental review of the proposed mine. The Chuitna Citizens Coalition has filed a petition with the state to preserve Middle Creek — a stream whose water would be needed for the coal mine if it is built — for salmon fishing and other public uses. David Schade, the state’s chief of water resources, has said fishing and mining would be mutually exclusive, characterizing them as “either-or” propositions.

The Institute for Energy Economics and Financial Analysis last week filed comments, as part of the DNR’s petition process, describing the ways in which market forces make it highly unlikely that the Chuitna mine could succeed.

THE BOTTOM HAS FALLEN OUT OF THE GLOBAL COAL MARKET

Proponents of the mine say the coal taken from Chuitna would be in demand by Pacific Rim countries that include China, Japan, Korea, Taiwan and Vietnam, although these markets, once thought to be insatiable, are slowing down dramatically.

The Chinese coal-import market – a principal driver of the global market–saw a sharp downturn in 2014, a direct result of the Chinese government cutting back on coal use because of air-pollution problems and making significant investments instead in renewable energy. The downturn is likely to continue through 2017.

International thermal coal prices collapsed in 2011 and are likely to stay low for the foreseeable future, an obvious signal that demand is dropping. At its peak in January 2011, coal fetched $141.94 per ton at the Australian Newcastle coal terminal, the price that is considered the global benchmark. Last month, Newcastle coal was $59.50 per ton, and some analysts see the price staying below $60 through 2016.

Bernstein Research, Goldman Sachs, J.P. Morgan Chase and Citibank have all published recent reports concluding that the international coal market is oversupplied and that the trend is not likely to reverse. Even Wood MacKenzie, which in 2012 predicted a steep rise in U.S. coal exports through 2030, shares the consensus view after reversing its position in February, agreeing that the market is likely to be in oversupply at least through 2021.

The Chuitna mine would have to compete with existing coal producers in the U.S. and around the world for a share of these dwindling export markets.

The bottom line is that there is no need for the Chuitna mine. There are no price or other market signals to support it. And given the “either-or” use of the water in Cook Inlet — a salmon fishery versus a coal mine — preserving the fishery makes much better economic sense for Alaska.